When Fidel Castro in 1994 opened up Cuba for mass tourism as a means for countering the loss of Soviet aid, he also introduced a new type of conflict to the Cuban socialist society. Since few Cubans born after the revolution in 1959 had been in contact with non-communist foreigners, the harsh reality of a huge gap in material well-being between the still developing Cuba and the industrialised West was more of an abstract fact than a source of everyday frustrations. But then, quite suddenly, hundreds of thousands of mostly Europeans and Canadians – bringing with them electronic devices, jewellery, brand clothing and enough money to enjoy their stay in the Caribbean – were to be seen all around the impoverished island.

At first, the idea was to keep the tourists in separated touristic areas where Cubans were not allowed to enter, like Varadero Beach outside of Havana. However, to attract the growing number of backpackers travelling through Latin America, as well as other tourists that were not (only) interested in flour-like sand on mile-long beaches, the restrictions for foreigners to move around freely were eased. As the gap in material well-being between the tourists and their hosts became painfully palpable, the incidence of robbery and theft started, not too surprisingly, to skyrocket.

Since the Cuban regime had bet on tourism to save the country’s economy, and the increasing crime rates were staring to affect Cuba’s touristic reputation, something had to be done. More policemen were hired, crimes against foreigners were prioritised and the sentences were harshened. Still, considering that the salary for an experienced physician is in the order of magnitude of 20 USD per month, the payoff even for small theft would for many be high enough to be worth the risk.

A late evening in the autumn of 2008, I was out on my habitual walk to explore different neighbourhoods of Santiago de Cuba, where I had been living for the last couple of months. The Caribbean heat makes it more agreeable to walk in the evening, and anyway I had not much else to do. As always when a blatantly foreign person moves around in areas a bit off the main tourist tracks in Cuba, the locals may react in three different ways: with sceptical curiosity (seriously, what on earth are you doing here?), with genuine hospitality on steroids (here, have a cafecito, come in to meet my family and wouldn’t you like to marry my cousin?) or with a badly hidden strategy to earn something from you.

All three reactions could lead to an interesting discussion, and since I went to Cuba partly to learn the language I was often keen to practice my very basic skills. So when a teenage boy, obviously reacting according to the latter category, asked me you need help?, I responded in the affirmative sí, puede ser. Trying to explain that I indeed was not a regular tourist passing by, but a foreign student staying for a year, I hoped he would loose interest in earning fast money and asked if he could show me around in the neighbourhood.

He took the mission seriously, and after more than an hour of walking all around the town and small-talking on the regular topic of comparing Cuba with the world ”over there”, we sat down to rest on a doorstep. Wanting to show him some Swedish music, I brought up my iPod with portable speakers that I always used to carry with me. Naturally, my newfound acquaintance was stunned by even the small part of the functionality he could grasp in the couple of minutes he was playing with it, and in regard to his reaction I can’t blame him for what later happened. Later on, after accompanying me almost all the way to my home, he grabbed the speakers and run. A bit shocked over the sudden change of events I tried to run after him for a while but soon lost any trace of him in the unfamiliar dark alleys.

Feeling ashamed of my naïveté, I went to the nearest police station to explain what just happened. Even though my case hardly could be considered severe, as a foreigner I was immediately appointed to a young, intelligent detective who started to question me. With my flawed spanish I tried to make him understand why I would walk around a dark evening, alone, in that non-touristic neighbourhood, with an expensive electronic device. He made no effort to hide that he considered I had myself to blame, and I felt that he was right. Anyway, at this point I had already given up on ever seeing my speakers again and soon started to feel sorry for the kid who hadn’t managed to steal away the iPod itself, which was was essential to get any music out of them. For insurance reasons I asked the officer to give me an official transcript of my police report and left.

In many street corners in Santiago you can see a strange-looking type of streetlamp. Instead of the usual light-emitting bulb, at the end of these lampposts there was a black hemisphere. Today I have realised that these exist in certain places in Sweden too, but at the time I had no clue to what they were. I first happened to ask about them one afternoon when a group of youngsters were enjoying themselves by speeding their car and cheerfully making obscene gestures over and over again towards one of these black hemispheres in a corner of Plaza de Marte. As you might already have guessed, these black hemispheres are surveillance cameras, and on this particular afternoon rumour had it that this particular camera was out of function.

A couple of months later, the young detective had left a note on my door saying that he wanted to see me, and that he would come by the next morning to pick me up. In the car towards police headquarters he declared that I had been lying, and that it was time for me to speak the truth. He had video recordings of my exact movements around town and there were recordings of me walking on streets I hadn’t told him about. They had also been able to identify and localise the boy, who was now in custody. 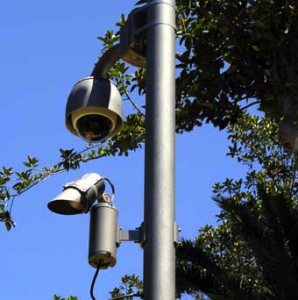 Indeed I had been lying. During our walk the boy had asked if I would like to hang out with one of his friends to share un porro, a joint. I happily accepted his invitation – well aware that this was his effort to earn something from making acquaintance with a foreigner – and we went to see this friend of his who made a living off selling small paper cones with weed, wild grown in the mountainous forests surrounding Santiago. Knowing that the authority’s tolerance for drug use other than alcohol and tobacco is very low, I had not told the police about this part of the evening. Now the detective was staring gravely into my eyes and wanted me to tell the truth.

My response was to nervously blame my faulty description on my lack of spanish skills and persisted that I had no reason not to tell the truth. After signing a paper declaring that I solemnly swore that my recounting was truthful, my speakers were given back to me and I left, quite relieved, thinking that I might not have gotten away so easily if not being considered of high value to the Cuban economy. (Feeling really bad for the boy however, I asked what would happen to him, but was only told that he was to be prosecuted.)

For the rest of my stay in Cuba, I became very aware of the surveillance cameras recording me. The increase of security I came to feel in areas where I knew there was a camera, was countervailed by an equal increase in insecurity in areas not covered by the cameras, knowing that if someone was to rob me, it would be there.

The vast amount of cameras also made me feel somewhat dismal regarding how the badly needed money that came in to the island was being used. One can argue that most visible investments in Cuba in general seem reasonable and sympathetic: the newest cars are ambulances, the most beautiful old colonial palaces are maternity hospitals and medicine is (almost) free of charge. However, even though the surveillance cameras may have advantages for crime prevention and enforcing, ultimately they are still expensive tools of repression, and do not in anyway address the underlying problems that actually cause crimes.

Today it seems as though Cuba, often criticised for its repressive surveillance, is not much more than an early adopter of a global trend to fulfil Jeremy Bentham’s Panopticon. United Kingdom’s nationwide system of CCTVs is now thought to be the one with most cameras per capita, and China is continuously investing large sums in more and more cameras. In regard to the current policies in large parts of the world of increased surveillance as a counter-terrorist measure, it does not seem realistic to hope for the use of cameras to be reversed, neither in the West nor in Cuba. Instead, one is compelled to adapt to being surveilled, which, with our capacity as humans to adapt to new circumstances, probably won’t be too hard. However, it might lead to a greater cherishing of the areas where privacy is maintained intact, and, haply, to joyful celebrations by rebellious teenagers at times when the cameras in our local public square happen to fail.