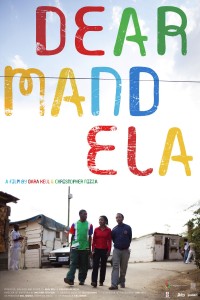 The film Dear Mandela takes off in the illegal settlements of Durban, South Africa. Despite its name, it is not a film about Nelson Mandela himself, but more about the legacy of this highly esteemed man. South Africa has perhaps not come as far as many South Africans wished, over the almost 20 years since the fall of Apartheid. Inequalities are still growing and a large portion of the urban population is still living in shacks on the outskirts of cities, with no right to land or security.

The main character of the film, a youth activist named Mazvi, symbolizes the divergence between the hope that Mandela fostered about change and the dire situation in which many people in South Africa are living today. This divergence is also apparent in the way that people are barely allowed to criticise the African National Congress (ANC), the party of Nelson Mandela, despite the fact that the ANC government in charge had limited success in changing the desperate living-situation, especially in the urban areas.

In this documentary we follow the group Abahlali baseMjondolo, residents of the shacks, in their struggle to reverse some of the injustices of the South African system. Peoples´ homes were being demolished without legal justification, and residents of the settlements were forced to move to temporary housing estates, where the living conditions have sometimes been worse than before. The queues for permanent housing were getting longer as the promise of a solution grew bleaker. Government-paid demolition men, called “red ants” because of their uniform overall, who themselves mostly stem from poorer areas, were hired to destroy illegal shacks. This led Abahlali baseMjondolo to take actions and fight for the right of their people. This is what the film is about.

The Swedish premier of Dear Mandela took place on 14 November 2012 at The Museum of World Culture as a part of the Global Week, arranged by the University of Gothenburg. Two members of the subsequent panel discussion, Thembani Ngongoma from Abahlali baseMjondolo and Marianne Millsten from the Nordic Africa Institute, agreed that the abolition of apartheid has not brought an end to inequalities in South Africa. Both confirmed that South Africa is facing huge problems, which span beyond the housing situation.

South Africa is the protest capital of the world. We are protesting the lack of basic needs, but it is also a question of human dignity and democracy. South Africa is heading for a catastrophe and change can only come from the grassroots. People have to make their own decisions, said Thembani Ngongoma

According to Marianne Millsten, the problem lies in the lack of local democracy, which was promised to the population by the ANC but not realized.

As we see in this movie, people are still being discriminated against, but people also take up the fight and build their networks from scratch to achieve their goals. It is very humbling to see their sacrifices and the resources that go into these movements. But on the question of where South Africa is heading, well, I wish I had an answer, said Marianne Millsten.

The directors Dara Kell and Christopher Nizza make it apparent that Abahlali baseMjondolo faces challenges from both the government and other activist groups. Big victories are levelled by great defeats and violent attacks.

The story of the film is solely told by its protagonists, which makes the messages authentic, but also causes some confusion with the storyline. Nevertheless, for an interesting insight into one of the most pressing problems facing South Africa, Dear Mandela is definitely worth a watch.