Skip to Content
Home Politics Belgium: The neverending debate about language, autonomy and the rise of populism

The media is often reporting on countries which have to deal with strong nationalist parties and growing separatist movements. Most recently there was an election in Catalonia, which in practice came to be about whether or not separate itself from Spain. Another country where the separatist movement is strong is Begium, where I am from.

I do not have the pretention of explaining the entire Belgian situation and all the different steps and historical processes that it has been through, since it is a very long and very complex story. However, I will try to shed light on certain events that I think are important to gain a better understanding of it from a Belgian’s point of view.

The Netherlands was split into two parts in 1830, following the London Treaty, and the southern part became the independent country of Belgium. The secession had great consequences on the economic, cultural and political spheres of Belgium.

A ‘French speaking’ cultural harmonization process took place in the public function because the revolution was mainly conducted by a French-speaking Wallonian bourgeois ruling class. This lingual imperialism, if you will, I believe to be one of the reasons for the current lingual disagreements in the country today. In addition to that, the south of the country was wealthier in terms of minerals industries and metallurgical firms than the north and therefore had a prosperous economy and an initial economical superiority towards the north. 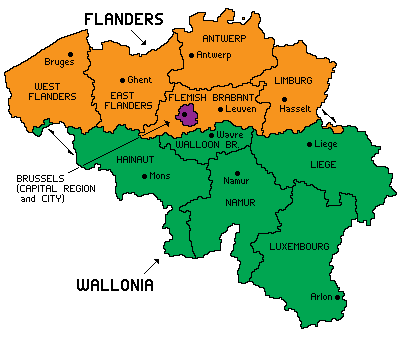 The political organization of the country might also shed light on the Belgian situation. By 1970, the country was a decentralized unitary state. Five state reforms have been performed to achieve its current federal structure. Certain Dutch and French speaking groups called for more autonomy for their regions and communities, resulting in the semi-autonomous Flanders in the north and Wallonia in the south, with the capital Brussels as an enclave in the middle.

Some people claim that the aim of the federalisation was never to lay the foundation for a politically viable union, but that it instead was principally aimed towards appeasing the tensions between the two communities.

However, the federalism structure of the country seems to work. Indeed, with three regions, three communities and one federal state, the distribution of knowledge and power seem to be quite balanced. Moreover, thanks to specific coordination processes and protection mechanisms for minorities, the Belgian federal system seems to work quite well despite its complexity.

Nonetheless, this delicate balance is being questioned by many today. Nationalist parties are strongly arguing against the federal structure of Belgium, claiming that it does not reflect the reality of the people anymore and are asking for a greater autonomy of the regions. Some more extreme parties even argue for a strict separation of the country. Which will require a modification of the constitution and it would face several challenges, such as representation in the EU.

What other reasons have contributed to this situation?

First of all, as I mentioned earlier, there is the question of language. There is no shared language in Belgium, because there are three official languages (French, Dutch, German) but no obligation to learn all of them – education is a community competence, so every community chooses the content of the educational programmes. No common language means that there is no efficient and clear communication among the people within the same country.

Secondly, there’s also a question of national solidarity which is being discussed. Indeed, the economic tendency has changed and the north of the country is now wealthier than the south, which induces some unemployment consequences. Some citizens of Flanders claim that they want a strict separation of the National Security System between the two regions. These two elements show that political reforms of the past have participated in the loss of the shared Belgian national identity.

Finally, and most importantly, there is the rising tendency of nationalistic parties that gain more and more political power after each election. They tend to exploit the easiest and most effective discourses to get their electors’ votes: They play on emotions, they over-simplify the reality and their leaders rely on personal charisma. In other words, populistic arguments are more than ever a key-element to win the elections.

However, the sincere inter-community cooperation and the thousands of Belgians who gather every year to celebrate the national day on the 21st of July are the evidence that a Belgian identity is still present.

But what if all of these claims were an attempt to overshadow the real socio-economic concerns in Belgium? What if, at the end of the day, the neverending debate about language and separation was only a game to hide fundamental popular concerns regarding immigration, unemployment, the environment and the economy?

A game in which Belgium is quite good at, some people even argue that it is a Belgian specialty, is the art of consensus. Maybe it is now time for us to make use of that talent and focus on the issues that really matter.