Skip to Content
Home Culture Lecture: ”How and why do the Israelis vote the way they do?” 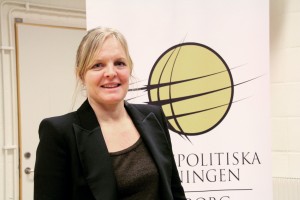 Tuesday 26th of febuary Isabell Schierenbeck, researcher and lecturer at the Shool of Global Studies at the University of Gothenburg came to Sprängkullsgatan 25 to give a lecture on how and why Israelis vote the way they do, with the Arabic spring in mind.

I was there, in Israel when the Arabic spring began. I was watching the fireworks over the western wall that told me Hosni Mubarak had resigned. Isabells theme was perfect for someone interested in how Israel works, like myself and a lot of others attending the lecture last Tuesday night.

To make us understand how and why the Israelis vote the way they do Isabell starts off by telling us about the different cleavages within the Israeli society and politics. Jews vs Palestinians (Arabs), Mizrachim vs Ashkenazim, religious vs secular and left vs right wing. Most often we only get the picture of the cleavages of religious and secular groups, but as Isabell shows us during the lecture there are many other groups to keep in mind while observing Israeli politics.

Since there are many cleavages, and therefore a lot of big issues in Israel, a party only needs 2 % of the votes to gain seats in Knesset, the Israeli parliament. This leads to a high interest for politics in Israel.

The state of Israel is only 64 years old, and yet it has already had 32 governments, despite the mandate length of four years. The reason why? Coalition governments that do not work.

In the election that took place the 22nd of January this year 34 different parties were competing for parliament and 12 parties (with all cleavages mentioned above represented) gained representation in Knesset to form a government. Isabell explains how the different parties are reasoning while making coalitions and according to her it is usual that parties with completely different opinions cooperate.

Interesting about the election this year is the influence of the Arabic spring on the political issues. ”They are scared” Isabell says, proving it by showing the two big issues that dominated the election 2013. ”They don’t know who their neighbours are or who they will be”, she says.

One thing Isabell notes, analyzing the influences the Arabic spring have had on the politics of Israel, is that the peace process for the first time was not on the agenda (except for the party Hatnuah that wants a peace process).

With the Arabic spring, a coalition government, focus on security instead of a peace process, what to expect? How stable will the Israeli politics be? Isabell thinks that there will not be any major changes, despite regional uncertainty. But she is curious about how many seats the different coalitions will get. She means that we can see a process of neo-liberalism loosing ground, and even though the peace process was not a big issue during the elections, she sees certain possibilities for progress.

While Isabell is giving her lecture, it becomes clear that Hatnuah (the party that propagates a peace process) have joined the government. As one of the first parties to do so, she thinks that they have got a good deal. This, in addition to Obama’s re-election, enhance the possibility for renewed peace negotiations, according to Isabell.

Thanks to Isabell’s lecture, we in the audience know more about the complexities in Israeli politics, and time will tell what the outcome will be.