Skip to Content
Home Politics Romania – From Communism to Democracy: The Dawn of Communism

In the year of 2013, Romania rarely appears in the Swedish news, and when it does, it is usually antagonized. The horse meat scandal, the referendum for presidential impeachment of the summer of 2012, and the annual reports of the European Commission regarding corruption and development are just a few examples of the cases when Romania has been in the headlines. Whilst some events and practices might shock the stranger who only catches a fleeting glimpse of the Romanian reality, it is worth mentioning that the causes are deeply rooted in the political scene of the past 68 years.

This article is meant to provide an introduction to an upcoming series that will shed light on the current political events of Romania and make them more comprehensive to the Western readers. 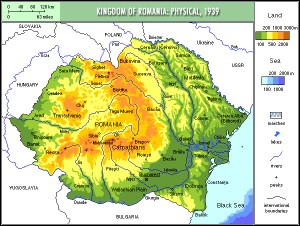 In March 1945, the Romanian Communist Party came to power by taking over the government, and within two and a half years it made King Michael abdicate, gaining complete control of the state. This was not the will of the people, nor was it a natural or predictable progress in the Romanian politics. Between the two world wars, Bucharest (the capital city of Romania) was often referred to as “The Little Paris”, as the bourgeoisie was prospering. Romania was a flourishing capitalist state, under a constitutional monarchy. Therefore, in order to determine the causes, one must gaze into the events that occurred outside the borders of the Romanian state. During World War 2, Romania had been an ally of the German state. The causes are still controversial and can be debated, as the key political figure of the time – Marshall Ion Antonescu – is sometimes called a fascist who was ideologically close to the ideas of The Third Reich, while others claim he was a very nationalist person whose only purpose was the territorial integrity of the Romanian state. In reality the reasons are not as relevant, as his political affinities led to a complete disaster for the state. Despite turning against The Axis after August 1944, it was too late; Romania was declared as a losing state, had to pay war reparations for supporting the German troops, and according to the settlement of Churchill, Roosevelt and Stalin from Yalta, was under the Warsaw Pact. Moreover, Romania has suffered territorial losses, of which the most important are Southern Dobruja (which still belongs to Bulgaria), and Basarabia (which became a part of the USSR and nowadays is embodied by The Republic of Moldavia). What remained of the Romanian state had to suffer a complete Sovietization.

At this point, a very important distinction has to be made: the communism from the USSR and the other members of the Warsaw Pact was not the “Great Revolution of the Proletariat” Karl Marx referred to in his writings. It was what is usually called “The Revolution from above”. The key elements of “The Revolution from above” are forced collectivization (private property is confiscated by the state and becomes “common” property), building of industrial branches, elimination of political elites. Moreover, all the states from the Eastern side of the Iron Curtain had the so-called “6 Point Syndrome”:

By applying these principles to the former prosperous capitalist state of Romania, it is easy to see how and why it lost its contact with the Western cultures and values. The political elites and intellectuals were replaced by uneducated but obedient “Moscow-approved” people, the businesses that used to flourish were property of the state and transformed into something that “benefited” The Party, the press was censored, and the random terror could reach anybody, at any time. There was virtually no way to speak against the regime, as children were indoctrinated to tell the authorities if anyone in the family mocked the leader or The Party, and any friend or neighbor could be a member of the secret police or collaborate with it. All the former values were completely replaced by Soviet propaganda, and everybody had to obey. Moreover, citizens couldn’t leave the borders of the state without a valid reason, and most of the times were only allowed to visit other Warsaw Pact countries. Romania truly was a Big Brother state similar to Oceania before George Orwell wrote and published “Nineteen Eighty-Four”. The only escape came later and was embodied by “Radio Free Europe” and “Voice of America”, which has also played an important role in the Revolution of 1989. But until then, there are 44 years of communism to be described and analyzed.

Romania can be pointed out as one of the “black sheep” of the European Union. And rightfully so, there are still many reforms to be undergone until the state fulfills the standards of the older democracies. However, it has only been 23 years since the Revolution of 1989, and the transition to democracy has no clear pattern: there is no Yellow Brick Road to follow, yet one can only hope that there is a pot of gold at the end of the rainbow. Stay tuned for the next article which will take a look at the two Romanian dictators!