Skip to Content
Home Politics Embassies: Appearance and Reality of a Glorified Workplace 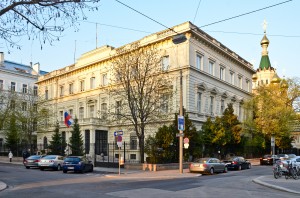 Embassies often inspire awe and admiration. To some extent, this might be due to the fact that they clearly stand out as a rare example of a workplace which enjoys special protection by international law. Although it is widely but wrongly believed that embassies form part of the territory of the sending state, meaning that for instance the Swedish embassy in Denmark would officially be Swedish territory, almost all states in the world have given up some of their power towards these premises by signing and ratifying the Vienna Convention on Diplomatic Relations (1961). Consequently, the police of the host state is obliged to protect an embassy’s premises from intrusion or damage and must for example not enter them without the permission of the ambassador, known as the “head of mission” in the language of diplomacy. Possibly by implication of these legal particularities, embassies are sometimes perceived as places isolated from the real world, inaccessible for any average citizen and thus shrouded in mystery. Generally being surrounded by large fences and well guarded by security personnel, this comes as no surprise. It is besides reinforced by the common assumption that diplomats lead a life in luxury, involving a fancy residence including housekeepers, a car – preferably a stretch limo – with at least one driver, and high society receptions where rich and influential decision-makers like them discuss international affairs over champagne, canapés and caviar.

Given the high security standards and secrecy requirements, few people are yet aware of what is exactly going on inside these buildings. If they did, they would know that the reality of a diplomat’s life actually looks quite different. While it might have come close to some kind of bright fairytale back in the old days, when power was still clearly distributed and shared between Western empires and their agents, a lot has changed since then, in particular for non-ambassadors – and basically every ambassador has started their career as a regular diplomat. Not only are they often for several years being sent to places which hardly appeal as a domicile, but they also mainly deal with tasks that amount to a quite typical office job after all. In other words, their daily routine can hardly be described as the political equivalent of a pop star lifestyle. Many diplomats in fact spend much of their time sitting behind their computers to draft briefing notes, analyses and reports – just like what you would expect from any other office worker. Nothing too bad, but nothing mind-blowing either. Afterwards, their working results are sent to the foreign ministry in their home country where the actual policy-making process takes place. Hence, embassy staff only provides valuable input for these decisions and closely follow orders coming from the coordinating ministry. Their workplace does therefore not constitute the setting where secret plans are developed and conspiracies might emerge.

In capital cities with a vibrant political life, there is obviously a lot going on outside an embassy, both during the day and after work. A government institution sets up a public hearing on their legal proposal under progress; an NGO organizes a debate on poverty in the EU; a lobby group invites a member of parliament to publicly discuss the requirements for economic growth with their guests. In order to fulfill their reporting function, diplomats typically appear on the list of attendees of such events. So yes, there are various opportunities for them with the potential to meet someone famous: not so much Steven Spielberg or Britney Spears, but politically active persons, like ministers or, maybe, maybe, if you get extremely lucky, a head of state. Likewise, there is also potential for free drinks and food, or at least light snacks, if you decide to stay for the reception and networking which generally follows the thematic exchange. However, you also get to attend these events when you work for another organization which is active in the field of the topic that is being discussed. As being engaged in and staying informed about current affairs is crucial for the work of an embassy, the job of a diplomat in that sense surely slightly differs from a regular office job where attending meetings like these are not a priority, but the high frequency of such events on the agenda hardly constitutes good grounds for glorifying a diplomatic career.

Naturally, it would also be wrong to understate the workplace ‘embassy’ in terms of attractiveness. To someone who enjoys staying up-to-date with current hot topics in politics and who likes to fight against bureaucratic inertia from time to time, a diplomatic career should definitely be recommended. In that respect, the idealized public picture of job profile and workplace probably acts as the perfect advertising campaign. Because who wouldn’t like to work for an organization that inspires awe and admiration?!