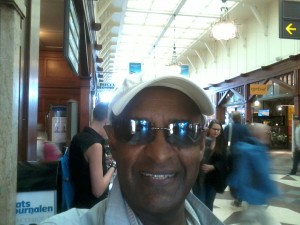 Q: First of all, I would like to thank you for responding to this interview. Let me start with the course on globalization which you gave us last February. This is an important course since very few students realize the broader implications of the currents of economic globalization or that we live in a globalized world. As I told you earlier, taking that course and interacting with all those interesting students from different parts of the world has been one of the most rewarding experiences. Is this the field of you expertise?

A: You are right: this is an important subject which is not widely known. Your class was indeed dynamic. That kind of atmosphere motivates students and teachers alike. By academic training, I am an international jurist. Most of the courses which I give here, at the University of Gothenburg, deal with human rights. However, I also lecture on globalization, conflict and other topics when the need arises. In fact, before coming to Gothenburg I was mostly giving courses related to conflict.

Q: Where did you lecture before moving to Gothenburg?

Q: Was it easy for an African American to relocate from sunny Southern California to Gothenburg which has a long, dark and cold winter? I thought the trend was to migrate the other way around. Personally, I prefer warmer climates!

A: I was already vaccinated for the Nordic winter. Before taking the US citizenship I was already a Swedish citizen, and well accustomed to the weather, culture, language and lifestyle of the East Coast: Stockholm and Uppsala. I have even lived in the Arctic.

Q: Where in the Arctic was that, and what did you do there?

A: That was in Rovaniemi, the capital of Finnish Lapland. I was working for the University of Lapland in the 1990s. It was an interesting experience to see sunshine day and ‘night’ during the summer and near total darkness during parts of the winter months to say nothing about the freezing temperatures (often around -30 degrees C). All in all I worked in Finland for about a decade, but mostly at the University of Helsinki.

Q: Where did you get your academic credentials from?

Q: Is Ethiopia your country of origin?

A: Since I was born and raised in Addis Ababa (the capital of Ethiopia), that was how I viewed myself when I was there. However, because my parents settled in Ethiopia from Eritrea, and the two were joined by the United Nations only after I was born, I suppose one can question whether I was Ethiopian at birth, strictly legally speaking. This, in part, explains why those who were born in Eritrea were later expelled from Ethiopia when Eritrea became independent and the two states clashed over a border dispute.

Q: When did you leave Ethiopia and why?

A: That was during the bitter struggle of the Eritrean liberation fronts for independence. At the time, it was unsafe for people with Eritrean background to live in Ethiopia. The more the Eritrean fronts were gaining strength, the more Eritreans inside Ethiopia were persecuted. When most of my Eritrean friends were either killed or imprisoned, I chose to leave. Fifteen years later, Eritrea gained its independence.

Q: Was it easy to do that and start a new life in a different country?

A: Walking from one of the villages in the center of the Eritrean countryside to the Sudanese border was not easy, not so much because it took more than a week, but because there were three highly organized armies confronting each other, often exchanging fire. Fortunately, there was a local guide who knew the safer routes. Again, Eritrea being a war zone where a state of emergency was in place, it was even risky to take the initial flight from Addis Ababa to Asmara (the Eritrean capital), to cross the military check point in Asmara or spend weeks in the Eritrean countryside before the long walk. The challenge of getting used to the Sahara desert climate of the Sudan and its Arabic language and culture was not easy. Having a Christian background is not a merit. Adjusting in Sweden was much easier since religious background did not matter, and it was possible to manage in English, at least until one learns Swedish. But the challenges of getting used to the new language, culture and the long, dark and cold winter remained.

Q: Where is the place you call “home”? USA? Sweden? Finland? Ethiopia? Eritrea? Do you maintain your connection with all of them? Have all this experiences changed you?

A: Since I work and live in Gothenburg, this is my real home and I am Gothenberger. Los Angeles is also my distance home, not because I know that region, but because that is where my family and the closest friends and relatives live. I can return back there without any need to get living or working permit. I even have an American family and our relation goes back to my high school time when I lived with them. I have kept my connection with Helsinki by giving courses every year. That gives me the opportunity of meeting good old friends and strolling around the city as I used to do.

I have not been to Ethiopia or Eritrea for a long time. When I visited Addis Ababa and Asmara last in 1995 the common question which I was getting was “when are you going to end your exile life?’. They have difficulties in imagining how it is possible to lead a normal life outside your traditional home country for decades or to develop cosmopolitan personality without abandoning the original ethnicity. That happens only if one has left the original home as a child or very young. I have not lost my ethnicity, i.e., being Habesha, as the highlanders of Ethiopia and Eritrea are called and now and then use Amharic and Tigrigna (the official languages of both states). To be enriched by several cultures and languages is very much like having several different distinct lives.

Q: Is it easy to develop the kind of academic career you are pursuing in times like these, when globalization is the defining feature of societies?

A: It has become easier than ever before, if one is ready to exploit the available opportunities. EU members have removed the visa requirements and exchange programs are now widespread and firmly rooted. It is even possible to get scholarships or student loans to pursue studies abroad. With easy mobility and academic exposure comes self confidence and career building. I did not plan to be the person I now am. I benefited from the exposures and capitalized on the opportunities that came along. When I was a student in Uppsala, I had to make extra efforts to follow courses at different academic institutions in France, the Netherlands, Norway, Greece, etc. The scholarship which I received in one of these institutions made it easier to get another one elsewhere and so on. When I was working for Finnish universities, I was also spending several months yearly at different American universities to conduct my post-doctoral studies, often without grants. That exposure later helped me to be accepted as a teacher at San Diego State University and that too led to my present position. Needless to say, all this was not a smooth ride.

Q: Are exposures and hard work guarantees for achieving professional success, even when you live outside the country of your origin? What about all the many other obstacles that are encountered on the way?

A: It is impossible to succeed without hard work. Exposure provides the forum for acquiring broader knowledge, and that is necessary for practical experience. Yes, there are people who have satisfied all these and that have not achieved their goals. If the reality surrounding us was that simple or just, half of the professors or CEOs in Sweden would be women. Life is a constant struggle with hurdles all over, whether you live in your own country or abroad. Success comes faster for some, but not for others. I just feel that it pays to work hard, aim higher while lowering expectations, be positive, focused and persevere and wait for the right opportunities to come. If it does not, well life goes on and should be enjoyed. Optimism stimulates higher visions and motivates to go forward. Pessimism is the mother of hopelessness. It ruins the day and destroys self-confidence.

Q: Your background is obviously “out of the ordinary”. Are you aware of this?

A: I have heard it. When I was pursuing my post-doctoral studies in California in the 1990s some of the American professors used to tell me how intrigued they were by my background. That was because they have never met a person of African origin who was working as an associate professor in Finland. The impression which they had about Finland, at the time, was that it was a closed society to foreigners. A few years back one American colleague in San Diego also asked me if I mind being contacted by one of the directors of the American TV talk shows – such as the Oprah Winfrey Show. He was planning to initiate contact after asking my permission. As you probably know, the American TV consumer is fascinated by intriguing personal stories. I doubt mine is that unusual. Of course, it is always possible to find people who would smile or pity me when they hear about the cycle of my long wandering life. I am referring to some of the extremes in the cycle which I told you about: i.e, the assent from a high school student life in the Minnesota to that of a well to do attorney in Ethiopia, before plummeting down to the status of a vulnerable refugee in one of the hottest regions of Africa and to rise up to the senior researcher status (‘legal scientist’) in Arctic city of Finland before being accepted as a faculty member in the second largest university in California (SDSU) and in one of the most pleasant cities to live in the United States. I hesitated to accept your request for this interview at first because I am not sure if this kind of personal exposure helps to build career. This is, in fact, the first time that I have ever given personal interview.

You are most welcome, Vlad