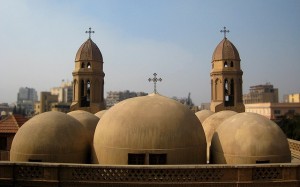 Since Utblick’s last article on the Egyptian Revolution, numerous new developments have occurred. The conflict has become more violent and more complicated with many different parties involved. Coptic Christians, who form a minority in the country, are one of the groups that have suffered increased harassment and violence in the past few weeks. To get a better overview of the situation for this group, Utblick interviewed George Fahim, a 28-year-old Coptic Christian who lives in Cairo. George shared with us his personal experiences as a Copt, his take on the political and religious tension in Egypt, and his hopes for the future of the country.

It’s been a number of weeks since president Morsi was ousted during Egypt’s Second Revolution. How is the situation on the streets today and what is the general sentiment amongst the people?

– The society now is highly polarized. People will just find anyone who is different from them in their opinion and consider him an enemy. It’s not just a difference of opinion, it is now a war and you have two sides, with no possible way of reconciliation. You are either with us or against us, it can’t be just objective. And then there is some violence that erupted in many areas. Governmental buildings were burned, and the Copts had their churches burned. They were personally attacked.

Do you know of any Copts in your close environment that have been personally attacked?

– I have a relative who lives in upper Egypt where the situation is really tense. He works as a Coptic priest. At the time of the incident there were two major armed sit-ins of Morsi supporters in Cairo, and the police forces decided that they should no longer exist. So they decided to just wipe them out. On that same day the priest who is a relative of mine got personally attacked. He actually is an elderly guy, like 70 years old. He was pushed down, they took off his pectoral cross, they smashed it on the ground, and then police forces intervened. I felt really sorry for him, because he is a very peaceful man, he was just finished with his prayer. I guess he didn’t even know about this kind of process of wiping out in the city. So I think he was surprised by the attack.

These attackers, who were they? Did your relative know them?

– I really can’t affirm their identity but I would say that most of the people that were engaged in such violent reactions were either members of the Muslim Brotherhood or supporters of the Islamic rule in Egypt. I don’t think that he even recognized them, but my relative is well known in the area. Also he has his garments and his pectoral cross – you can really recognize a Coptic priest, or even a Coptic woman, in the streets. So the attackers just wanted to show their frustrations with the decision of the police forces to wipe out the sit-ins – which by the way I don’t think was a wise decision by these forces.

Do you know about any other people in your environment that have been harassed?

– Yes. In Alexandria, my cousin works as an accountant in a building that belongs to the church. In the same building there is also a kindergarten. One day Muslim Brotherhood members in Alexandria wanted to attack the church and burn it. The priest tried to close the gate, but there was a huge number of protesters. They actually managed to open the gates, but in the end their attempt was not successful. But the kids there were terrified, and my cousin told me that the police fired tear gas to disperse the people, and the kids were almost suffocating. It was horrible over there. But then when their attempt to burn the church was not successful, they burned the cars of the Copts that were parked in front of the church. My cousin’s car was burned and the priest’s car as well. I think if there was a possible way to enter the church and burn it down, they would do it. You know, the Copts are really attached to their churches. It’s not just a building where they go to worship, they consider it part of their identity, like a second home. So you feel like your second home is being attacked, is being burned… It’s hard to see that you’re attacked in your country.

We do hear more and more reports of Copts wanting to flee the country. Is it really that bad?

– Yeah, it’s happening. But it didn’t start these days, it started when Morsi got to be president. We have always lived with political Islam, we live in Egypt where the majority are Muslims. There are certain people that consider Islam not only a religion, but a state. So it’s an umma, it’s an Arabic word that means “nation”, a nation of Islam. Some of those people are fundamentalists and violent. So they actually find it justifiable to use weapons in their case. So when Morsi was a representative with the Muslim Brotherhood and became president of Egypt, Copts were thinking that maybe then it’s the end of the secular Egypt that is welcoming everyone. So they decided to flee. There were huge waves of people, some estimated that 70.000 people fled in 6 or 7 months. I think it was horrible when I heard about people I personally knew who tried to just leave Egypt. They wanted to go anywhere. Not going to somewhere better, just fleeing Egypt.

And how does that affect you?

– Well, I keep losing friends. I never thought of leaving Egypt myself. But I find that some of my friends were concerned about their children and wanted a better future for them. Some people started to stay and fight. But those are not the majority. So I find it justifiable of course, they have every right to leave. I personally didn’t decide to leave because I wanted to live in Egypt.

What did the human rights situation for the Copts look like during Mubarak’s rule?

– It was just ups and downs. I remember the bombing of the church in Alexandria, just like a month before Mubarak was out. And then a year before that there was a guy who just fired bullets on people coming out of the church. I think like ten were killed in that instance. But I would say that most of the Copts were not affected. It hurts emotionally because they heard about fellow Copts being attacked, but I wouldn’t say that they felt threatened in Egypt. But they felt threatened in Morsi’s rule.

The ousting of Morsi meant different things to the many parties involved. What did it mean for the Copts?

– It meant salvation from the atrocities that they faced. Morsi as a person seemed like a decent guy who wasn’t really extreme in his opinions. But most of the Muslim Brotherhood members actually cannot tolerate living with the Copts. They consider that the umma of Islam is either Muslims or people that are under what’s called “Dhimmitude”. That means you have to pay Jizya, which is special taxes you pay because you’re not a Muslim. So people consider the umma, or the nation, of Islam as the highest aim of the Muslim Brotherhood. There was no place for the Christians to live in such a nation. Because it wasn’t built on citizenship or equality or anything, it was based on either Muslims or infidels. And that was a really huge threat and a concern for me, of course.

With the situation tense as it is, do you personally see any possibilities for a political reconciliation at this time?

– I think the situation in Egypt will not settle down in the near future. Even though the peace forces in the army assure the people that everything will settle down. Most of the people in Egypt want everything that is related to the Muslim Brotherhood or the Islamic rule to be out of the picture. And I personally don’t agree with that. I think there should be a political way of solving this dilemma with the least amount of bloodshed. I think the Muslim Brotherhood can’t be out of the picture. They have their basis in the streets, and actually they are a huge number. And it’s not only Morsi as a person, it’s the political Islam that has supporters. And I can’t imagine that those people will just stay calm and feel fine about being out of the picture. If a president who is a member of political Islam can accomplish a decent living for poor people, if he can end poverty, provide a better education for children, then I would not have a problem with that. So I actually don’t want a Copt to be president, that’s not one of my aspirations. I just want a person who can provide these things that we went out for in the past waves of the revolution.

Of course, during the protests a common goal was to fight for a better Egypt. What does a better Egypt look like for Copts in the country?

– For the Copts it means having a country that is based on citizenship, not affiliations. If you are an Egyptian you should have 100% of the rights and 100% of obligations towards the country. So every Egyptian citizen should be equal, which is something that we are lacking now. And also they would like to find tolerance in a better Egypt. This is not really related to who rules, but it’s related to the kind of culture that we want in Egypt. The idea that I can be tolerant to someone who is different from me – in religion, in political view, in gender, and in race. Also, the Copts want more churches built. That was something that was held in the hands of the president. Only the president can write a decree of building a new church. So it was harsh, it was really difficult to build a new church. Christians want to find a place to worship. But I do hope everything will end soon. No more bloodshed, I pray for that every day. No more bloodshed.