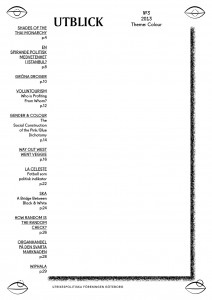 The latest issue of Utblick emanates from the significance of colours. Colours are assigned different meanings over time and place, and are often a powerful symbol in its simplicity. The different colours of Wiphala, an ancient flag from the Andes, used to represent cultural heritage but is upcoming as a symbol for resistance. In Thailand, every weekday is assigned a colour. Here, the king has a peculiar trendsetting role: as he was born on a yellow Monday, the public is generally seen wearing yellow clothing on Mondays to manifest their royal support. In Gothenburg, Way out West festival took the “green” stance to stop selling any meat, stirring up controversy, whereas the ecological outlook is rather dim when it comes to pharmaceutical industries. Read about these issues and much more in Utblick #3 2013. You’ll find it in print at cafés, libraries and university institutions, or download the digital version from here. Enjoy reading!

On the same theme, featured only on the web, is this article on the ideology and realpolitik: Colours and Contrasts in World Politics