Many say springtime is the time when Göteborg awakens. With the first rays of sunshine, suddenly the streets are filled with elated citizens – making you wonder where all of these people were hiding outduring winter. While right now may be a great time to enjoy this city’s soft evening light and the spring flowers, there is one destination more than 8550 kilometers eastwards that offers an equally splendid springtime experience. Nihon e yokoso: Welcome to the Land of the Rising Sun, and the imperial city of Tokyo. 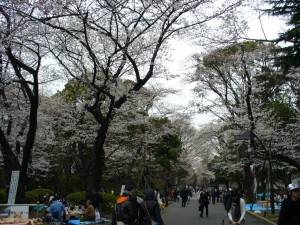 Starting at the end of March and continuing throughout April, Japan is cloaked in a flurry of cherry blossoms. Delighted Tokyoites will be out en masse, carrying with them the obligatory items for a proper cherry blossom viewing party. Ueno Park is the place to be to spread out your blue tarpaulin, munch on some snacks and – naturally – consume copious amounts of sake. After all, who could resist getting gloriously drunk with friends under a starburst of pink and white flowers?

If you’re low on greasy food, you can check out the cramped, seedy and all-round awesome Ameyoko alley, right underneath the train tracks of Ueno. Sellers will shout at you in a hoarse voice, praising their fresh lobsters, fake Pokémon watches, freshly cut pineapple or flip-flops. Take your pick of the cheap and delicious street food like yakitori (grilled chicken skewers) or yakisoba (fried soba noodles with some vegetables and lots of gloopy brown sauce). 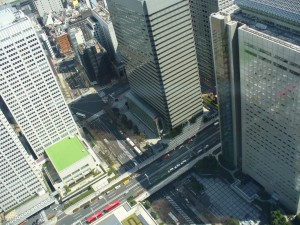 If you are lucky enough to be in Tokyo on an unclouded, nicespring day, it’s definitely worth heading over the financial district of Shinjuku to get an overview of the city. Shinjukuharbors the Tokyo Metropolitan Government Building (or simply Tochô), which offers a panoramic view that will leave you almost as dizzy and light-headed as a cup of sake in the park. Completely free of charge, you can drink in the city sights and maybe even catch a glimpse of legendary Mount Fuji in the distance. Compared with the ridiculously expensive Tokyo Tower (a red and white replica of the French Eiffel Tower), this is an excellent early morning stop. 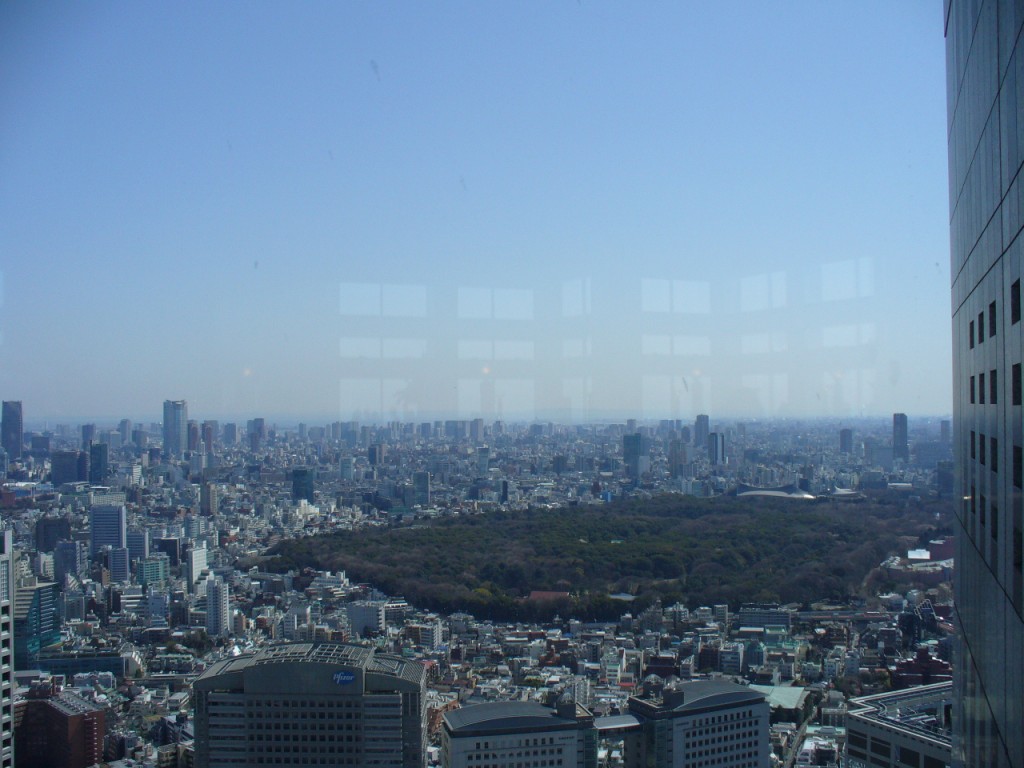 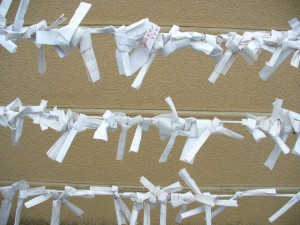 One thing that is very noticeable from the topmost levels of Tochô, is the massive Yoyogi Park. Walking into the park through the giant wooden Shintô gate, you are enveloped in a peace and quiet that seems oddly out of place in such a big metropolis. Wander onwards underneath the centuries-old trees that were donated from all over Japan, until you discover the serene and stately Meiji shrine. At the entrance, you will find all the attributes of a typical shrine: a water well to cleanse your hands and mouth with a bamboo spoon; small votive tablets on which people write their prayers and wishes; and a rack with rows upon rows of white paper strips fluttering in the wind. These little fortune notes are taken home by people when they contain good fortunes, but tied to the rack and left behind by worshipers who draw a fortune paper with a bad prediction. A convenient way of dealing selectively with messages from above! On a springtime weekend day, your chances are also quite good of witnessing a typical Shintô wedding at the Meiji shrine, with the couple beautifully dressed in traditional garments. 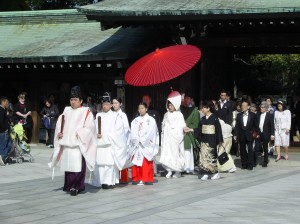 To discover the difference between a shrine (the Shintôism place of worship) and a temple (where Buddhists pray), switch from perfect peace to the bustling atmosphere of the Sensôji temple. Located in the down-to-earth, residential neighborhood Asakusa (a far cry from the skyscrapers and office buildings of Shinjuku), the precincts of this temple are a world of their own. You’ll be met by the scent of joss sticks, ferocious lion statues, paper lanterns towering over you…and hundreds of believers. Whether they worship at the altar of bodhisattva Kannon or in the rows of little food and souvenir shops might remain a matter of some doubt. 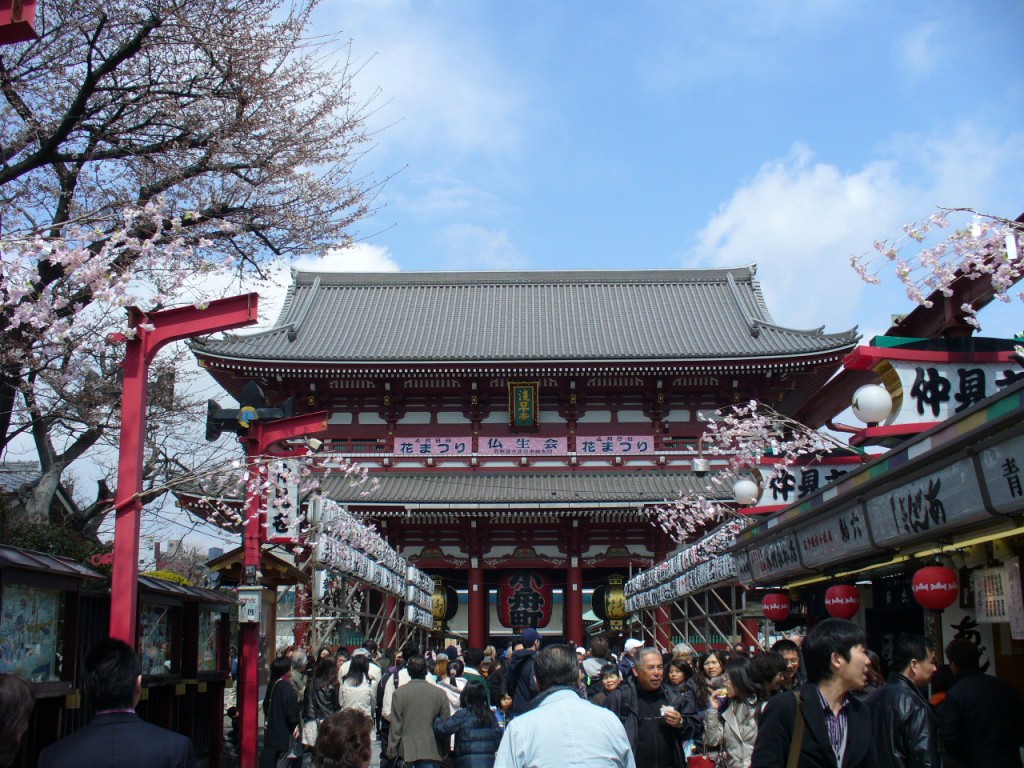 In stark contrast to these spiritual matters is the craziest and perhaps most Japan-ish neighborhood of Tokyo on the edge of Yoyogi park. Harajuku is the natural habitat for lovers of fashion and cosplayers, who congregate especially on weekends to admire each other’s outfits and swap the latest fashion news. See and be seen! Guys dressed like Dracula in tophats and waistcoats sit next to lolita girls with teacups in their curly hair and dresses straight out of Alice in Wonderland. 18th Century princesses shriek in delight over Hello Kitty shoelaces, while Visual Kei fans with insane hairstyles will make you realize how Japan got its cutting edge reputation. Wander up and down Takeshita Dôri street (a must for lovers of claustrophobic crowds!), assemble your own outfit or simply allow yourself to be enthralled. Of course you also have to pick up a Japanese crêpe along the way, complete with Nutella, bananas, strawberries and agenerous helping of whipped cream. 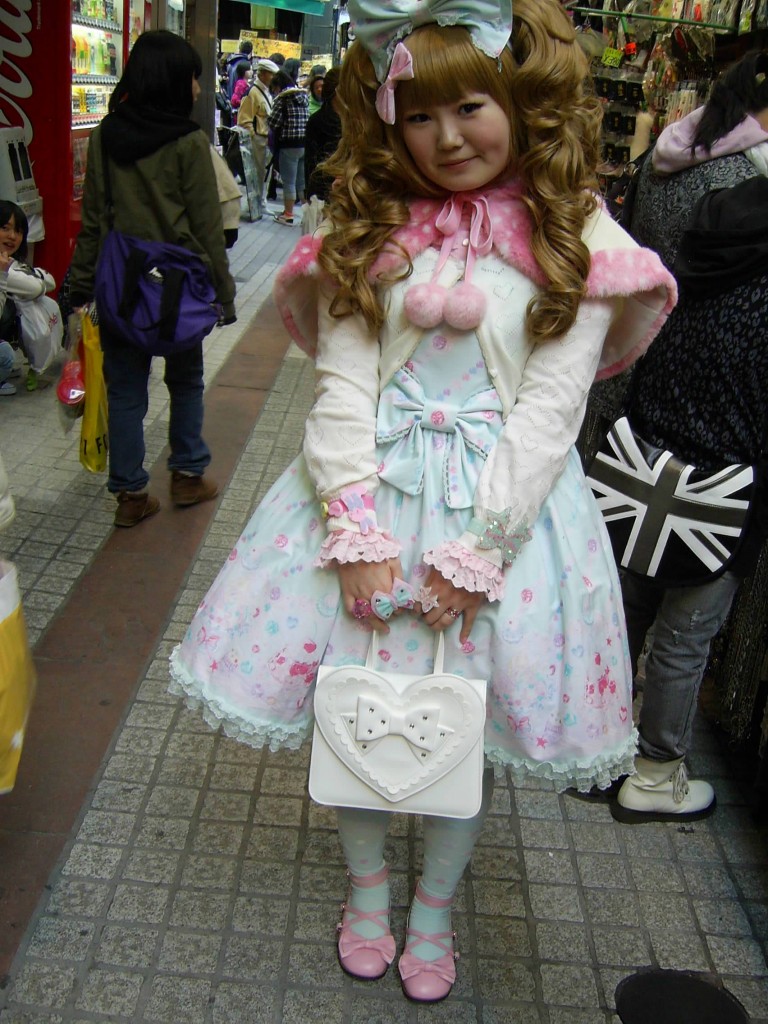 If you’re suffering from sensory overload, head over to the Tokyo-Edo museum. This high quality museum provides a most enlightening overview of the capital city’s history, including a huge replica of a traditional Kabuki theatre. If anything, the fact that the exterior of the museum looks like a spaceship straight out of Star Wars should be reason enough to go check it out.

Close to this museum lies Akihabara: a mecca for electronics collectors, with hundreds of stores filled with weird Japanese gadgets and video games. Especially at night, this area is magically lit up with neon advertisements and flashing colors – the Japan of legends. Akihabara is also where you can have a drink at one of the notorious “maid cafés.” The waitressesthere are dressed in French maid-uniforms, talk to customers in the most incredibly polite Japanese, act cute, and will basically live up to your horny fetish dreams of being treated like a lord. It’s no problem if you don’t want to venture into one of the maid cafés themselves, since you’ll usually bump into one or two maid girls on the streets already, handing out flyers for promotion. Apparently maid cafés take on non-Japanese girls as waitresses too, so if you’re a bit short on cash and need a summer job: you know where to send your CV. 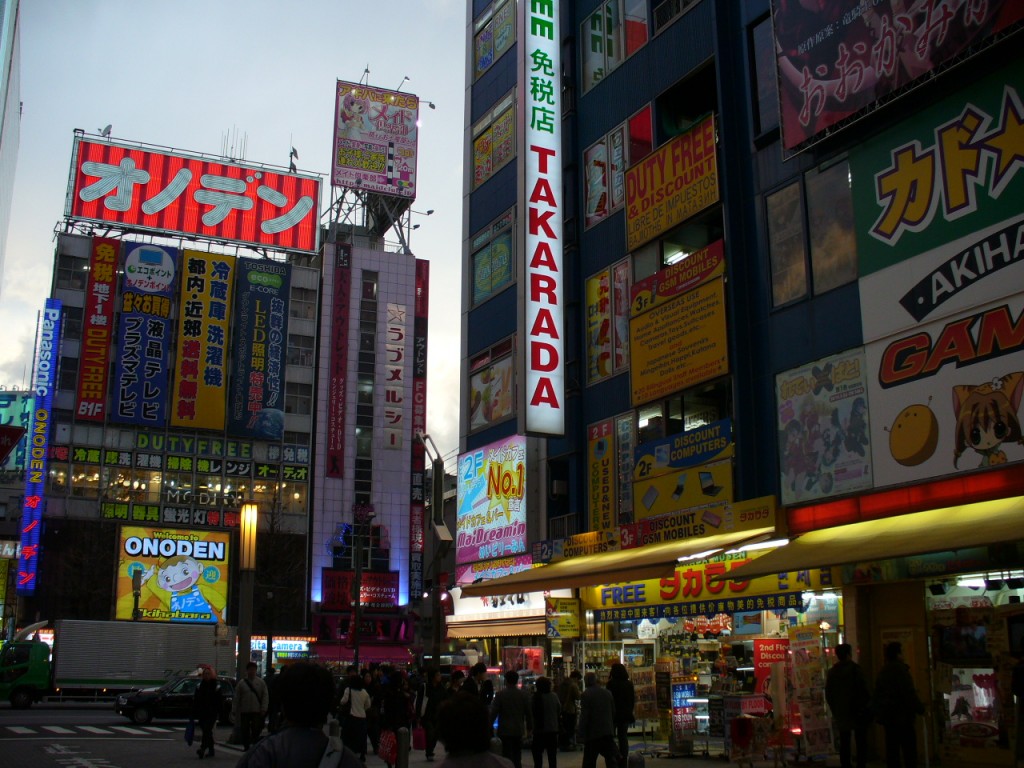 Another breathtaking location at night in Tokyo is the hip and glitzy Shibuya area. Excellent for shopping and dining, this is where a famous scene with Scarlett Johansson in Lost in Translation was shot. Follow in her footsteps and stand on the junction of seven streets and countless pedestrian crossings, surrounded by an impressive wall of towering neon commercials.

If you’re getting hungry from wandering around the concrete jungle, going to an izakaya café is highly recommended. The best izakayas are often stylishly decorated in the traditional Japanese way (with sliding doors separating the rooms, tatami mats and low tables). Instead of being just an ordinary bar, izakayas can serve as high class restaurants, business meeting places, pre-karaoke hangouts or the setting for a romantic date. When Japanese friends go to an izakaya at night, they’ll usually eat a full dinner there by ordering a variety of small dishes like sushi, sashimi, noodles, or dim sum. The fun starts when people sign up for “nomihôdai” (all-you-can-drink), which usually includes anything from cocktails to jugs of warm sake. Since many Japanese don’t seem to tolerate alcohol very well, you can imagine they’re in for a lively night…

This is why late at night is a good time to round off a day in Tokyo by going people-watching – a free and most interesting way to study Tokyoites when they’re out and about. Or an anthropological goldmine if you’re trying to find out how drunk Japanese (returning from an izakaya party) attempt to navigate through Tokyo’s busy subway system. The awesome blog Tokyo Damage Report (your number one insider’s guide to Tokyo, including a search for the legendary Japanese vending machines of schoolgirl panties and vacuum-wrapped used sanitary pads – complete with Polaroid photo by the previous owner) does a hilarious report on this practice:
http://www.hellodamage.com/top/2008/02/24/people-watching-in-shinjuku-station-drunks/ and http://www.hellodamage.com/top/2008/02/10/more-shinjuku-station-war-stories/.

In the space of less than two hours, you could witness people getting into fights, slipping and falling grandiosely, sobbing tragically under the influence of alcohol, or friends bowing to each other when saying goodbye, thereby bumping butt-first into another passerby.

Since any sentence or blog on the topic of “Meanwhile in Japan…” can lead to the craziest, most baffling, amazing stories, a single city guide can hardly cover the myriad wonders that Tokyo has to offer. Do yourself a favor and include springtime in Japan on your bucket list – you may find yourself addressing the spirits next to a Shintô priest, fighting with schoolgirls during a pink tutu sale, or getting advice from a suit-clad salaryman directing you to the best sushi joint in town. Either way, it will be “cool!!” 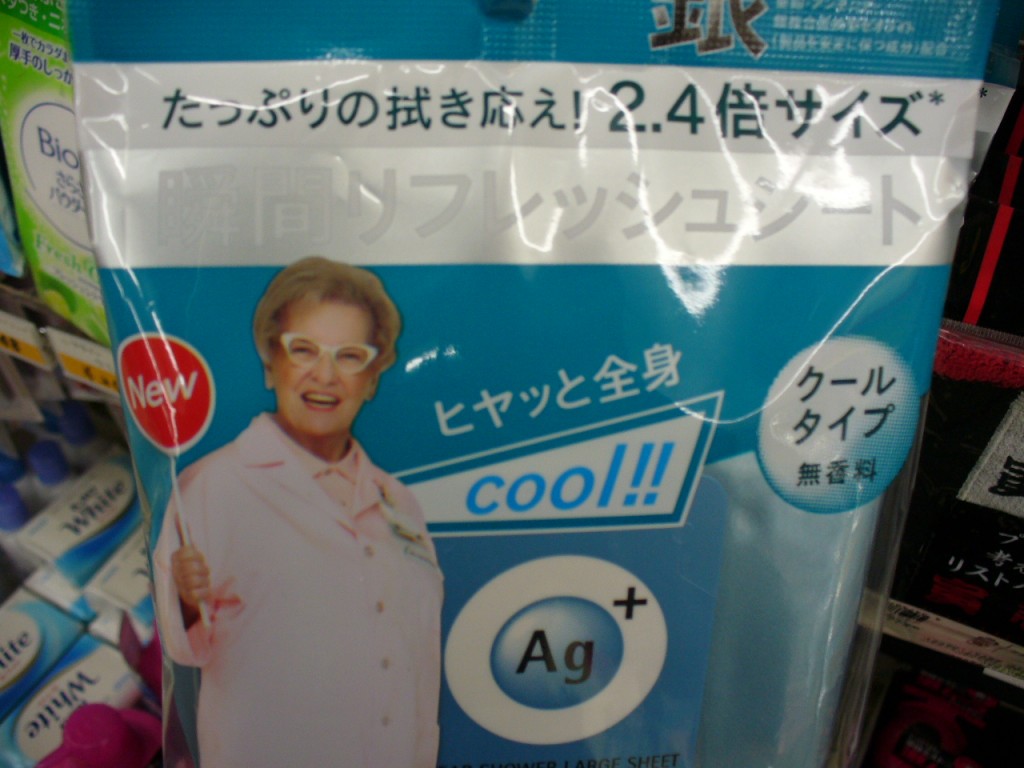