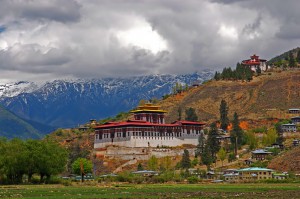 Under the towering presence of the Himalayas, in the midst of lush forests and pristine rivers, lies the small Buddhist nation of Bhutan. Landlocked by India and China, Bhutan emerged from international isolation as late as the 1960s and has seen significant socioeconomic progress in the last few decades. It is a country where solitary temples stand brightly in the cool mountain air and simple houses offer shelter to their inhabitants, most of whom are still employed in agriculture.

The late onset of modernization in Bhutan has allowed the country to adopt its own unique development philosophy inspired by Buddhist values. In this view happiness not materialism is seen as the foremost goal of development. It is the only country in the world where “Gross National Happiness” (GNH) is the main development indicator rather than GDP. The ambitions of the Bhutanese government are to constitute policy which will not only cause a higher standard of living and a better quality of social services for the Bhutanese, but also enhanced possibilities for spiritual and emotional growth.

The term ”Gross National Happiness” was first used in 1972 by king Jigme Singye Wangchuck, who contemplated about an alternative development vision for Bhutan which would be based on Buddhist values and the unique Bhutanese culture. Next, scientific research was conducted to find the best ways in which happiness could be achieved in a Bhutanese context by means of surveys and happiness studies. A Gross National Happiness Commission was instituted to ensure the mainstreaming of GNH into all planning, policy making and implementation in Bhutan.

As mentioned, GNH should be seen in the context of Bhutanese culture. Important to know is that the state religion in the country is Drukpa Kagyu Buddhism, with the majority of the population practising the Kagyu or Nyingma school of Tibetan Buddhism (or, commonly, a combination of both). Bhutan’s long-lasting international isolation has meant that it has shielded itself from the spread of popular Western culture and the influence of modernization. Imagine that as late as 1999, a ban on television was lifted. Until today the economy is very small with most people living in very remote areas and living off forestry and subsistence agriculture. Until very recently the country was an absolute monarchy, but in 2008 the king transferred most of his powers to give rise to a more democratic constitutional monarchy. Today, the king is still a very important and highly revered figure in Bhutan and the symbol of unity.

Seeing the important part played by the well-conserved traditional Bhutanese culture in everyday and political life, it is only logical that the country’s development philosophy should be influenced by this. A sidenote here, though, is that Bhutan is in no way religiously homogenous. Most notable is the predominantly Hindu minority population of Nepalese descent, who live in the south of the country.

Taking a closer look at Gross National Happiness reveals that it consists of four main pillars: good governance, sustainable socioeconomic development, cultural preservation, and environmental conservation. Within these pillars are contained several “regular” development goals in the areas of health, education, good governance and standard of living, but also topics which in most other countries tend to be afforded low priority. Examples of these are psychological well-being, time use, cultural resilience, and ecological diversity.

To start with the first, in Bhutan health is seen as a balance between mind and body. Psychological well-being includes a balance between positive and negative (in Buddhism referred to as “disturbing”) emotions as well as a person’s spirituality, such as the practice of meditation and consideration of karma. Similarly, time use looks at a balance between time spent on both paid and unpaid work, such as voluntary work, household work, childcare, care of the old, as well as time spent resting. It is suggested that all these activities are important in their own way and that one should be able to allocate each activity sufficient time. 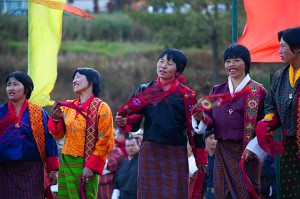 Moving on to cultural resilience and ecological diversity, we can see that these are central aspects of GNH. As mentioned before, Bhutan has for a long time been quite isolated from the outside world, not least culturally. GNH sees culture as vital to fulfilling spiritual and emotional needs and seeks to preserve Bhutanese culture in the face of possible negative influences of globalization. This includes following the Driglam Namzha, a code of etiquette for dress, cultural activities and architecture. Another valued aspect of Bhutanese culture are Zorig Chusum skills, which refers to the traditional arts such as painting, weaving and sculpting.

Ecological diversity is similarly deeply ingrained in the Bhutanese lifestyle and in the natural environment. The country features everything from broadleaf forest in the south to the snow-capped Great Himalaya in the far north of the country. Bhutan has an incredible biodiversity and is home to many threatened animal species such as snow leopards, tigers and the golden langur. Much of the natural environment is still intact and the high elevations and rugged terrain pose obstacles to building roads and other infrastructure. At the same time, many people work in forestry and subsistence agriculture which leads to the situation where people both live in the midst of nature and are dependent on it.

Furthermore, nature plays a central role in Buddhism, which stresses the interconnectedness of everything, the benefits of leaving worldly life and of living in harmony with nature. A traditional belief in Bhutan tells of deities that inhabit places like mountains, rivers and valleys. Since these gods are very sensitive to disruptions they will – if disturbed – unleash their wrath in the form of landslides, droughts, floods and poor harvest. This belief system indicates a deep understanding of ecosystem vitality. It is for example also believed that when humans degrade the land to a certain degree, the gods will leave it for good and settle in a more undisturbed and attractive place, far away.

The importance of nature for Bhutanese culture has led to the government passing several environmental protection acts. For example, a 1995 resolution states that no less than 60% of the country must remain forested. Also, despite Bhutan’s large potential for tourism, each tourist must by law pay a high daily tax so that the number of visitors is controlled and hence stresses on nature are minimized. GNH aims for all necessary development projects to go hand in hand with environmental considerations.

In short, Gross National Happiness comprises many more sources of happiness than what can be measured by GDP. Even though it has its roots in Buddhist culture, most of the tool today is used to evaluate policy alternatives based on scientific research and with consideration for aspects of culture and nature preservation, amongst other things. Of course, as of today, Bhutan is still a least-developed country with a small economy and a heavy dependence on imports. However, according to a World Bank report, the number of poor was reduced by almost half between 2007 and 2012, and UNICEF reports an increase in life expectancy at birth from 53 years in 1990 to 67 years in 2010. Despite its difficulties, Bhutan seems to be on the right track. In the meantime, Gross National Happiness can serve as a very interesting example of an alternative outlook on development, if not everyday life.

Read more about Gross National Happiness on the website of the Centre for Bhutan Studies.