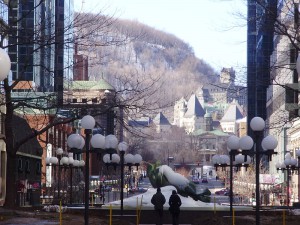 The point of view emphasized in the passage above is unusual as a part of a university course outline. Or, to be precise, it is unusual from a Swedish perspective. To deliberate on the different advantages of weaponry innovation and combat strategy seems miles away from the main focus in Swedish international relations studies. Not that military activity is a banned issue in Swedish universities, but that the emphasis is generally on how to reduce military hostility in general and not on debating the effects of different offensive moves.

I took this class, POLI 388, last semester as an exchange student in Montreal, Canada. I was deeply uncomfortable having to express my own opinions on how the raising threat from China should be confronted by the US. Would it be best to invest in increased arms to create deterrence? Or should “we” rely on strong allies and balance the power? Or perhaps we should focus on the national resources and growing industries in Africa and try to get an advantage? All the other course participants actively engaged in these considerations. I, on the other hand, just wanted to follow my instinct and shout out “I am not Henry Kissinger and this is not the 80s!”. It did not feel reasonable to have this conversation without any reflection and criticism about our starting point. The realist tradition of international relations studies was never questioned; other states were always portrayed as potential threats and military means was always a possible procedure.

At one point, our professor mentioned that it could be healthy to, citing his powerpoint, “try and step outside one’s own cultural perspective in order to embrace the possibility that non-Western cultures may exhibit different ways of thinking and acting”. He clearly admitted that there was a possibility that the world could be seen in another light. However, his main argument for doing this mental exercise was that it “could help reduce the criticism that strategic studies has traditionally been too Western-centric”.
I cannot say that the class was pointless. Week after week, I found myself taking part of these bizarre deliberations, because although the situation was absurd, it was also intriguing. No wonder the North American foreign policy is so offensive if this unreflective and dogmatic conception of the world is what is advocated in school.

The unique political history of the North American countries give us a hint about why the realist perspective is so normalized and unquestioned. In contrast to Sweden, both Canada and the US have been involved in several military conflicts during the 20th century. Besides the two major world wars, the nations have been engaged in many foreign military operations and interventions, and they have also been the targets of other states’ hostile threats, particularly during the cold war. The military has traditionally received huge financial resources and foreign affairs have always been a political key issue. Being the hegemon of the world, the US, with Canada as its ally, sets the political, military and scientific agenda and by questioning the ideas in any of these spheres, you question the world order.

In conclusion, this course actually taught me something profound about international relations by broadening my understanding of different political traditions and cultures. Nevertheless, my own conception of the world has not changed. I still feel alienated from the perspective proclaimed in the course outline and I am still not convinced of the advantages of being able to tell the differences between intercontinental ballistic missiles and multiple independently targetable reentry vehicles.