Turmoil Under Heaven, this year’s first issue of Utblick, is here!

We live in uncertain times: a majority of the BRICs-countries; Brazil, Russia, India and China – comprising over 40% of the world’s population and roughly 23% of world GDP – are now governed by leaders with authoritarian tendencies. Populist, nationalist, and/or revisionist governments dissatisfied with the Liberal World Order established after the Second World War: from Putin’s Eurasian vision for Russia to Modis’ Hindu-nationalism, Xi’s China Dream, and Bolsonaro’s Trumpista-regime in Brazil. Meanwhile, the leader of this order – the United States – is seemingly relinquishing its role as global Hegemon and returning to the isolationism characteristic of the interwar period, when both presidential candidates and Ku Klux Klan-members loudly proclaimed “America First!” 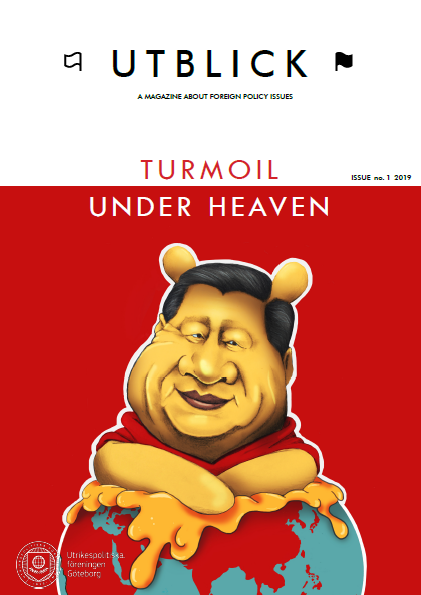 This issue is dedicated to the largest member of the aforementioned constellation, China, and its role in world order, its civil society, its history and future. You will get a micro- and macro perspective on China; from children and women in rural households and civil society activists in the Tibetan highlands, to the consequences of revised waste management policies and the situation of Uyghurs in Xinjiang Province.

Will China be a benevolent Hegemon or a voracious predator? Will it preserve the current order, or will it change it in its own favor? Will it surpass and replace the United States as leader of the World, or will it be able to coexist peacefully? Will it be able to create enough goodwill among neighbors and forge a “community of common density” in the words of Xi Jinping, without being perceived as a revisionist threat to international order? Is there a real risk of a Great Power War breaking out between the US and China? All these questions, and more, are examined by our contributors in this issue.

You can read the new issue HERE.