The 2016 United States presidential election culminated in a victory for outsider Donald Trump, but also proved to be an exceptional year for American third parties. This time around, however, Americans are overwhelmingly throwing their support behind the two strongest candidates in the race, alleviating fears that third parties could “spoil” the election and hand another four years to the incumbent president.

In a typical presidential race, low support for third parties would be expected, and certainly nothing to write home about. But their pivotal role just four years ago warrants discussion of the traction gained in 2016 and whether it could be maintained in 2020.

The lack of viable alternatives to the Republican and Democratic Parties is a source of both confusion for observers abroad and great frustration for many American voters. While other countries factor in outside parties by allowing voters to rank party preferences or by allocating legislative seats proportionally, the American electoral system incentivizes voters to support one of the two largest parties rather than “waste” their vote on a losing contender.

Still, despite many barriers, these outsider parties sometimes do better than expected. And even small third party gains can complicate the election for the strongest players, which is what happened in 2016. The Green and The Libertarian parties, constituting the largest third parties in modern American politics, gained enough support to receive national attention and influence the election outcome.

In terms of political stance, the Green Party’s name makes its environmentalist agenda quite clear. The Libertarians, on the other hand, are often dubbed “fiscally conservative but socially liberal” and emphasize personal liberty above all else. Despite not being lifelong party members, two former Republican governors – Gary Johnson of New Mexico and Bill Weld of Massachusetts – teamed up in 2016 for a strong, qualified Libertarian ticket. They earned a total of 3.3 percent of the national vote – the highest in Libertarian Party history. Jill Stein, a medical doctor with an activist background, was the Greens’ nominee in 2016. Her campaign gained the support of just over 1 percent of voters nationally – the highest since Ralph Nadar’s 2000 campaign.

The impressive bump in support for third parties in the previous election is commonly attributed to the widespread dissatisfaction with the mainstream party nominees; Donald Trump and Hillary Clinton ended the election season with the lowest approval ratings in presidential election history. Alternatively, the third party wave could be understood as yet another aspect of the broader anti-establishment trend of 2016, alongside Trump’s pseudo-populism and the insurgent campaign of democratic socialist Bernie Sanders.

All in all, third party support was a critical factor in the state races of Florida, Michigan, Pennsylvania, and Wisconsin, which sealed Trump’s victory. His slim margin of victory in these four states was dwarfed by the number of ballots cast for the Greens and the Libertarians. This has led some to argue that these “wasted” votes cost Hillary Clinton the election.

Such claims assume that third party voters in these states should, and would, have voted for the democratic nominee in any “normal” election year. This is not a stretch for green-minded voters. However, the more sizable cohort of Libertarians, with their emphasis on small government and personal liberty, are closer to the archetypical Republican voter.

But for the upcoming election, weak third party support overall is in fact projected to help Biden’s electoral chances, indicated by recent NBC polling. In a sample of voters who supported Johnson or Stein in 2016, 47 percent say they are voting for Biden, only 20 percent will opt for Trump, and 33 percent are still undecided or are backing a different candidate. However, in an NBC interview, Jeff Horwitt, one of the pollsters behind the survey, warns that this does not necessarily indicate enthusiasm for the Democratic nominee.

“In our research across the year, it’s not as though they have great feelings about Biden,” he clarified. “But when you compare their feelings around the questions, positive, negative scales and things like that, Trump’s standing is just much, much worse.”

In other words, the pragmatic preference for Biden over the idealistic choice of voting Green or Libertarian is driven primarily by the desire to oust Trump. When asked how third party performance in this cycle compares to 2016, former Libertarian VP nominee Bill Weld agreed that the sitting president has changed the game.

“People are scared of Mr. Trump,” he stated, “and so, that would lead many people I think in both those parties, the party of Jill Stein and the party of Gary Johnson to vote for Biden.”

The year 2016 was also marked by division within the major parties and an overconfidence in Hillary Clinton’s ability to win, encouraging dissatisfied partisans to take greater risks at the ballot box.

“Both parties are unified behind their candidates in ways they were not” in the last presidential election, says John Farmer Jr., director of the Eagleton Institute of Politics at Rutgers University. “Some Democratic voters who did a protest vote, figuring Hillary Clinton was going to win – I think they regret that.”

For this reason, this year’s major third party nominees, the Greens’ Howie Hawkins and the Libertarian Party’s Jo Jorgensen, are struggling to stay relevant; both campaigns have only raised approximately 10 percent of their 2016 predecessors. Exposure and name recognition is also a problem, one that was mitigated four years ago thanks to a favor from CNN, whereby both the Greens and the Libertarians were given primetime “town halls” to present their agenda and answer questions from a live audience. This proved to be a surprising departure from the media blackout usually faced by smaller parties, both before the 2016 race and today.

After four years of the Trump administration, voters find it harder to legitimately equivocate the faults of the two nominees and justify picking an alternative to the “lesser of two evils.” Biden is not widely loved and he is far from perfect, but he does not need to be in order to win the election. Trump is the deciding factor, and Americans are overwhelmingly either with him or decisively against him. 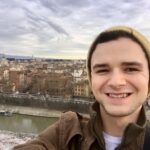 I’m a politics student with a history problem. Writer for Utblick since August 2020