“Turkey: Freedom of expression in jeopardy”. So was entitled the report-article published in March 2018, which was co-authored by Istanbul Bilgi University lecturer Yaman Akdeniz and Ankara University lecturer Kerem Altiparmak[1]. The report, the title of which is rather accurately chosen, generally evaluates the numerous recent oppressions, accusations, and condemnations against journalists, students, intellectuals after the failed coup attempt on July 15, 2016. The authors indicate that the main reason to interfere the freedom of expression mentioned by the state is fighting against terrorism before the revolution attempt and mainly after it. For the considerable part of the submitted accusations and judgments the matter was Article 299  of the Criminal Code of the Republic of Turkey, that is “Insulting the president”. In this analysis, we will discuss the mentioned Article about the restriction of freedom of expression and will particularly talk about the increase in numbers of court cases opened on this basis during Recep Tayyip Erdogan’s leadership.

The freedom of expression and Turkey

Turkey has always been one of the most restrictive countries concerning media freedom and freedom of expression in the  Council of Europe. Of a total of 20657 judgments issued by the European Court of Human Rights (ECHR) between 1959 and 2017, Turkey was involved in 3386 judgments as a respondent ranking first in the list of all the member states. Of a total of 700 judgments in which the ECHR has found a violation according to Article 10 of the European Convention on Human Rights, Turkey ranks the first with 281 verdicts[2].

Perhaps the fourth estate relates to the restriction of freedom of speech the most. In recent years Turkey has not left the top of the list of countries with most journalists arrested. According to the January 4, 2020 report of “The Economist”, Turkey is the second in this list conceding only China until December 1, 2019. While “The Economist” talks about 47 imprisoned journalists, the Independent journalists’ association (Özgür Gazeteciler Inisiyatifi) mentions 130 journalists and Turkey’s Trade Union talks about 108 [3]. Especially after 2016, Turkey has gained the reputation of so-called ‘’unsafe’’ country for journalists. By “To be a member of a terrorist organization”, “Canceling accreditation”, “Insulting the president” and matters like these have lately been the causes that many representers of foreign media working in Turkey were imprisoned and exiled [4].

Turkish government’s persistent control over the media has also been proceeded under the Justice and Development Party’s power. Perhaps alongside with many such incidents (when the authoritative media didn’t allow the coverage of undesired cases), the most vivid one was the demonstration of a film about penguins by the prominent CNN Türk during the critical moment of repressions on protestants and citizens at 2013 Gezi park protests. European Commissioner Štefan Füle called such attitude towards the protests ‘‘deafening silence of Turkish media.’’[5]

In Turkey, along with the penetration of the Internet, the Internet censorship and the blocking of sites were spread by the Committee on Information and Communication Technology (Bilgi Teknolojileri ve Iletisim Kurumu), the Government,  the Department of Telecommunication, Postal services adjacent to the latter (Telekomünikasyon Iletisim Baskanligi) and the courts during the last decade.  Youtube, Twitter, Vimeo, and MySpace have been blocked for many times since 2008. And only on January 15, 2020, the ban on Wikipedia, which has been in place since April 2017, was lifted.

The Article 299 of 5327 Criminal Code, accepted by Ahmet Necdet Sezer ruling in the 2005s, has the epigram “Insulting the president” (Cumhurbaskanina hakaret). The epigram consists of the following points:

1.One is sentenced to imprisonment for 1-4 years if he or she insulted the President of the Republic.

2. If the offence was committed in public, the penalty strictens to 1/6 extent.

3. In order to initiate criminal prosecution connected to this offence, the permission of the Minister of Justice is needed [6].

The effective remedies for the president have very deep roots. In Ancient Rome, the emperors considered any offence against them to be an offence against the country by uniting with the country for abolishing the tendencies of republican order [7]. In essence, Article 299 continues existing as a remnant of the imperial leadership. And the fact, that the Article 299 is regulated under the “Offences against the Symbols of the State Sovereignty and the Reputation of Institutions” (Devletin Egemenlik Alametlerine ve Organlarinin Saygiligina Karsi Suclar) and not next to the Article under the title of “Offences against dignity” (Serefe karsi suclar) in the “Insult” (Hakaret) of the 125th chapter, says that the legislator considered Insulting the President in the Penal Code as a crime against the State.

And there is a question. What can be considered an insult according to this Article? Can the words “thief” and “tyrant” with which, by the way, a lot of judicial cases are open, really be estimated as insults against the president and not be a strict criticism against the government and its president?

In the declaration on Freedom of political debates in media, adopted by the Committee of Ministers of the Council of Europe on February 12, 2004, it is stressed that the criticism of the political officials, the state leaders, and politicians is one of the most important preconditions in democracy.[8] This document completely corresponds to the approach of ECHR to this article. Particularly, by ECHR’s decision about Pakdemirli/Turkey in 2005, ECHR’s motive of demonstrating journalist Bekir Coskun’s insult to the president as a way of expressing freedom of expression in 2015 can be seen. And on October 14, 2016, in the report 858/2016 of the Venice Commission, the following is said; ”Due to its excessive use, Article 229 (Insulting the President of the Republic) should be completely repealed.”

After the publication of the above-mentioned report of the Venice Commission, impetuous discussions heated in Turkey. In 2016, on this background, the Minister of Justice of Turkey, Bekir Bozdag said the following in his speech; “At present, there are 47 member states in the Council of Europe. The phrase ‘Insulting the President of the Republic is considered an offence’ exists almost in all the states”. In other words, the existence of Article 299 and the restrictions of freedom of expression were justified by referring to the presence of the Article in other European states. However, we have to observe that changes are happening in European states concerning this Article. And the usage of this Article is rare in the mentioned states. But in Turkey, the frequent usage of this Article is remarkable. 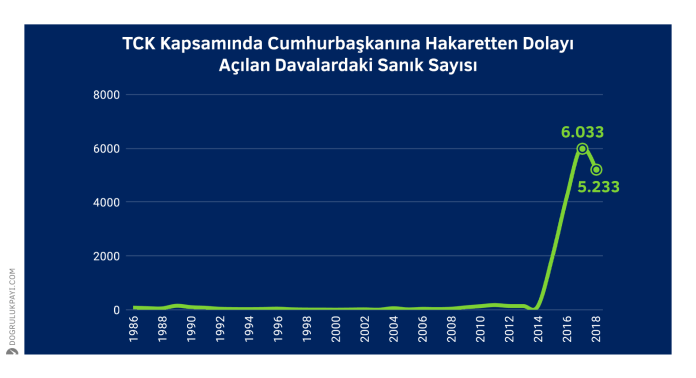 The amount of defendants by Article 299 on Turkish Criminal Code. Source – Dogruluk Payi:

At least it’s clear from the diagram that Erdogan is the Turkish leader who has used the Article the most. By this Article, the number of accusations exceeded the previous one by 19.5 times forming 17406 cases during the first years of Erdogan’s leadership[12].  Many deputies, journalists, cartoonists, artists, and ordinary citizens appeared in the defendant’s chair for insulting  Erdogan. The reason for the accusations are public speeches, humorous posts on social networks, caricatures concerning Erdogan. By the Article 299, the leader of Turkey’s Nationalist Movement Party (MHP) Devlet Bahçeli, Selahattin and Figen Yüksekdag Demirtas, former co-chairs of the People’s Democratic Party (HDP), HDP deputy Ahmet Yildirim, Armenian Member of the Turkish Parliament Garo Paylan, and other political figures were charged. In this regard, the amount of judgment cases on Kemal Kilicdaroglu, the leader of the CHP or “Republican People’s Party” was record-breaking. Kemal Kilicdaroglu has become the figure who most often appeared in the defendant’s chair during the whole history of court cases on the grounds of insulting Erdogan and paid most compensation to him. Only in the last 8 years, 15 judgments were made against Kilicdaroglu, and he was compelled to pay 1 million Lira compensation to Erdogan [13]. On July 17, 2018, Erdogan filed a lawsuit against Kilicdaroglu and other 72 deputies from his party for publishing a famous caricature “Kingdom of Tayyip’s” on Twitter[14]. Adjacent to the caricature, Kilicdaroglu wrote “You can’t avoid criticism and humour by jailing people. You have to tolerate it!”

However, we must take into consideration the circumstance that Erdogan is simultaneously the president of the ruling Justice and Development Party, its first face and symbol, the main figure representing this political force in the elections and campaigns (so was during Turkish local elections in 2019). Therefore, being protected by the above-mentioned special law as a president can, in fact, become a circumstance that constrains the opposition and creates unequal conditions.

In our opinion, the invalidation of the article in the coming years is more than unrealistic, because as we have already seen, President Erdogan is the Turkish politician who has used the article the most (which, of course, also has a psychological component) and Kilicdaroglu’s appeals to tolerate criticism have been in vain.

In conclusion, it should be stated, Turkey is one of the most prominent countries in the world in terms of restrictions on freedom of expression, information control, and censorship. By the example of Article 299 of the Turkish Constitution, we intended to show that the authorities accept any criticism with great difficulty and try to silence dissidence. This analysis allows to conclude that the present president of Turkey Recep Tayyip Erdogan is the leader who subjects the statements against him to censorship and is protected judicially the most. While a lot of intellectuals, lawyers, ordinary citizens, and international Human Rights organizations realize the necessity of fighting against the Article 299, no way of fighting against the usage of the Article has been effective yet.

[3]The Economist: Second in the number of imprisoned journalists in Turkey / Newspaper Wall / 01.04.2020 https://www.gazeteduvar.com.tr/gundem/2020/01/04/the-economist-tutuklu-gazeteci-sayisinda-turkiye-ikinci/

[5] See speech by Commissioner Š.Füle during the ”Speak-ap!2: Loud wake up call for improving media freedom in Western Balkans and Turkey” conference