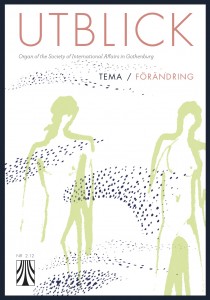 The second issue of Utblick this year was released today! Broad and varied aspects under the theme of “change” are discussed and analysed, such as the development for women during the current remodeling of Egypt, the prospects for rain forests harboring large oil reserves in Ecuador, whether social media campaigns like “Kony 2012” could induce real change on the ground and the importance of this year’s many elections for making change happen. Read it, spread it, comment on it.

In the paper issue, we wrote in the article ”Palestinian Spring at its Heels?” that Salim Valley and Abir Kopty were court witnesses at the Russel Tribunal. This was incorrect; they acted as speakers at the setup of the Tribunal in Gothenburg February 2012. Furthermore, we wrote that Abir Kopty demanded a return of all Palestinians to the 1967 borders, but the correct quote was: “Return of all Palestinians to their original homes and villages”. We have corrected this in the online version, and apologize deeply for the mistake.