I stumbled upon a confusing and contradictory explanation of Dharma, Hinduism and religion on the website About.com, a platform that (according to the website) provides “high-quality information” written by experts.

In the following article, Religion Vs Dharma: Why Hinduism is a Religion of Freedom, the writer explains why the Hindu concept of ‘Dharma’ as well as Hinduism is not religion, but still equates ‘Adharma’ (the opposite of Dharma) with ‘non-religion’ and continues to talk about Hinduism as a religion anyway, as well as making several other interesting claims. This article is therefore worth attention not because of its contradictions, but because it’s a good example of interests at stake (social, political, etc.) when using ‘religion’ and related categories such as ‘Hinduism’.

In Religion Vs Dharma he begins by claiming, “Religion literally means that which leads one to God”. He then explains that ‘Dharma’ is wider than ‘religion’, meaning “that which binds society together”, and writes “In this sense, Hinduism is not a religion; it’s a ‘Dharma’.” But then we learn about the opposite of ‘Dharma’ in the following statement: “That which divides society, breaks it up into parts and makes people fight one another is Adharma (non-religion)”.

That last parenthesis is interesting: ‘Dharma’ is not religion, yet somehow the opposite of ‘Dharma’ is equated with ‘non-religion’? Furthermore, despite these definitions and claims, he continues to refer to Hinduism as a religion anyway, for example: “Hinduism, unlike other religions…” and “Hinduism is a religion of freedom”. Also worth mentioning is the statement “The real believer in God has his heart always lifted to Dharma”, which is, ironically, pretty close to the very specific definition of ‘religion’ he started with. Here we might also want to pay attention to how some idealized “true believer” enters the picture (reminding us of a semantic evil twin: “the not-so-true believer”).

So, perhaps the obvious question is: what was the point of saying that Dharma (and Hinduism) is not religion in the first place? Or, to put it differently: If the categories ‘Dharma’ and ‘religion’ so clearly overlap and slips into similar use and meaning, why is it so important to declare their dissimilarities, worth an article polemically titled “Religion Vs Dharma”? Well, I have some guesses.

Just as with today’s highly popular ‘Spiritual but not religious’-talk, there is probably a lot to gain from arguing why concepts and worldviews is ‘not religion’. I don’t blame them, it must be impossible (if not foolish) for a promoter of Hindu/Indian concepts not to “cash in” on the lucrative ‘not religion’-market. 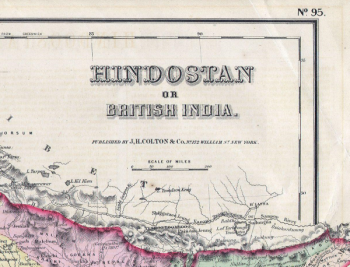 The problem is, of course, that it would be impossible to imagine anything as ‘Hindu’ or ‘Hinduism’ at all if it weren’t for the 18-19th century Western discursive invention of ‘World-religions’. Through this system of classification the subcontinent of India – with all its diverse cultural practices; identities; groups; institutions and traditions – was generalized under the single label ‘Hindoosim’ (deriving from ‘Hindu’, which in turn simply designated ‘Indian’ as in “those in India”). Consequently, this laid the foundation for the abstract idea of some uniform, homogenous and cross-cultural (Indian) sameness, which in turn provides the possibility of presuming some distinct ‘it’ to refer to whatsoever.

What is particularly interesting is how the writer of these articles tries to include a historical-critical approach to the term ‘Hinduism’, but keeps both the term and some underlying ‘it’! This can be found in the article Common Myths About Hinduism: Much More Than Just Another Religion!  (titled “Hinduism is NOT a Religion!” in the link that’s on the first article). Under the heading “Hinduism: A Modern Term” he writes: “Words like Hindu or Hinduism are anachronisms. They do not exist in the Indian cultural lexicon. People have coined them to suit their needs in different points of history. Nowhere in the scriptures is there any reference to Hinduism.” Then, right after that, he simply continues with “Hinduism does not have any one founder…”, as well as claiming that (my favorite for sure) “Evidence that Hinduism must have existed even circa 10000 B.C. is available”.

The paradox for writers like these, I would argue, is that they obviously have a lot to gain from pulling out the ‘not religion’-card, considering the contemporary negative associations with ‘religion’ as well as the widespread ‘Spiritual but not religious’-discourse (particularly common, it seems, among people interested in Hindu/Indian philosophies). But at the same time, they are referring to (i.e. reproducing) a concept that depends so heavily on the discourse of ‘World-religions’, which predicate the possibility of assuming there being some distinct worldview whatsoever.

As for ‘religion’, what we get is a sliding between different meanings of the word, which I’m guessing signifies something like: “not that kind of religion, but a higher, more advanced, spiritual kind of religion”. Perhaps a good analogy would be ‘The Force’ in Star Wars: religion being some universal force-field that’s just out there, but depending one’s interpretation and practice of this force-field, it has an evil/wrong way (the dark side) and a good/right way (the light side).

Anyway, before I end this text, consider the following two quotes from this writer’s second article, how “it [Hinduism] defies classification as a religion per se”, yet somehow “Hinduism is a unique faith!”. This rhetoric of always-changing-but-still-the-same is a contradiction that is unavoidable from, on the one hand, the interest of keeping a classification of an exceedingly vast diversity of cultural practices as somehow being homogenous and identical, but, on the other hand, keeping within the modern liberal discourse of openness and individual freedom – as in proclaiming “Why Hinduism is a Religion of Freedom”. In other words, contradictions that emerges from the strategy of constructing a continuity of ‘Hinduism’ as a cross-historical essence.