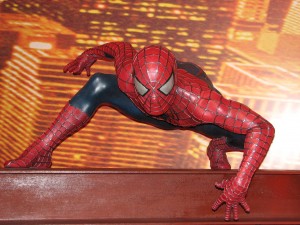 “I do not agree with a word that you say, but I will defend to the death, your right to say it.” Voltaire.  This proclamation was one that I took upon myself to illustrate as part of a class project once upon a time back in the long lost years of my 9th grade.

I pondered this proclamation once again, in regard to a discussion that took place at work, where a discussion had ensued concerning the subject of freedom of press/media/expression, versus the balancing act of what is tolerable or acceptable to be part of society. The first point of discussion was the cartoon strip that the Danish cartoonist had drawn of the prophet Muhammed, the spiritual leader of the Muslim community, depicting him in various derogatory manners. My point of departure was that this could be viewed as incitement against a minority group, especially as this minority group constitutes a very large minority within Scandinavia. I proceeded with the arguement that a similiarly sensitive reaction would’ve been in place if this cartoon was about Jesus Christ, not today, but in the mid 18th century, when the Scandinavian countries were still largely practising the Christian faith. My argument departed from the point that the reaction of Muslims might be very different if it wasnt a minority group, but foremost, if it had the same time trajectory as Christianity has today, that is of 2000 years.

The second example raised was, whether the arguement of “freedom of experssion/speech/press/media” would be utilised as a viable defence had it been a cartoon depicting atrocities of the Holocaust in a humorous manner? The reaction was a clear cut no. But the strongest reaction was when, for the sake of argument, I raised the issue of the Swedish extreme-right-wing party SD and how they, as a political party, were initially treated by the other political parties. None of the other party leaders shook hands with SDs leader Jimmy Åkesson, but there was a clear cut message, emanated through the absence of a dinner invite to the annual Nobel Prize dinner party as well as any form of acknowledgement by other Swedish political parties.

Hypothetically, SD has only been able to enter the Swedish Parliament due to the party having support in the Swedish populace, so wouldnt it then be democratic to treat this party in the manner that all other political parties are treated, both by each other but also by the establishment? Today’s discussion clarified, that somewhere there needs to be drawn a line. A line of argument that I am in full agreement with. This line, is drawn collectively, as a society and active population, where we show what is acceptable and what is unacceptable. Freedoms come with caveats, and in this case, hatred is a norm we as a people should never promote. I am glad, that the Artistotlean arguement of the “good society” is active and alive. Especially that it set emotions in high action when I prodded my friends the way I did.

We must take into consideration the effect our actions, whether these be labelled under the guise of Freedom of Press, Speech or Media, and how this plays out on our society, all of society. Perhaps Spiderman summarises it best when saying “with great power comes great responsibility.”