A review of the lecture on civil courage by Brian Palmer at the Gothenburg Annual Lecture on Global Collaboration, November 2012 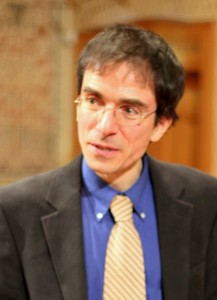 Outside the windows of the old university building in Vasaparken, the fog and the darkness join each other, spreading a cold and dark blanket over the city of Gothenburg. Two hours ago, I attended a seminar on climate change in the same room and even though the speakers talked about global warming, I was freezing cold all the way into my bones. This lecture on civil courage, however, will make me leave the building a lot warmer later.

The lecture on civil courage is not the traditional lecture where Brian would talk about the definitions of the term and how it is used. It is a lecture where stories about courageous persons in history are used for inspiration, for making an impact on our hearts and for making us think about our own reactions in similar situations.

He begins by talking about a recent event in Pakistan where a little girl, named Malala Yousufzai, was shot for writing a blog for BBC about the life of an eleven-year old girl in Pakistan’s Swat walley. He also talked about the German resistance activist Sophie Scholl, Witold Pilecki, who snucked into Auschwitz to be able to report to the world about what was going on in there. Following, Palmer returned to more recent years and talked about a Russian journalist, Anastasia Baburova, who was shot in 2009 along with a human rights lawyer on the streets of Moscow by some gunmen. He finished with a story about Wesley Autrey from New York, who showed an unconceivable civil courage when he chose to risk his own life by acting as a human shield to a man who, due to an epileptic seizure, had fallen down on the track  when a subway train was coming. A story which made everybody in the room think, would I done the same thing? Would I have chosen to risk my own life in order to protect a stranger in the subway? 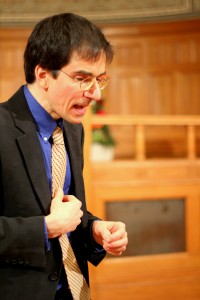 It is not only the stories about these extremely courageous persons that make my body feeling warmer, it is how after each story, Brian turns to the picture of the person and shares his admiration. Despite his thin body, Brian Palmers has a heart large enough to warm up everybody in the big, old aula. Brian’s lecture on civil courage may not make you jump in front of a train and protect another person, but afterwards you certainly want to become a better person, a person who goes to places that scare, who goes in opposite directions of anyone else, who runs to the fire. Everybody may not be a Wesley Autrey, but maybe you can be a “snack man”, who silently blocks the way of the offender while continuing snacking on fries. To view the clip on “snackman”, click on the link below,

4 thoughts on “Go to the places that scare you”