Skip to Content
Home Economy Economy Snowden and the NSA 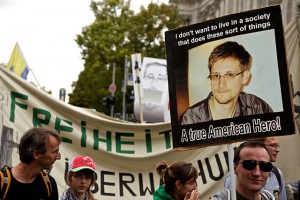 At 15:25 on the 11th September 2001 the first Swedish newscast reported from the terrorist attack on World Trade Center, a mere half-hour after the incident. At request by the news anchor, SVT’s foreign affairs commentator said “The world will not look the same after this. (…) We will have more of a world that monitors after this.” I was baffled at how strikingly correct this analysis was, before the dust had even settled.

As a direct consequence, then-President Bush signed the USA Patriot Act (Uniting and Strengthening America by Providing Appropriate Tools Required to Intercept and Obstruct Terrorism Act) in October the same year. The act had passed the senate by 98-1. The extensive surveillance uncovered by Edward Snowden was made possible by a very aggressive interpretation of one part of the act. This interpretation was held secret and unknown to the public. Section 215 reads “Access to records and other items under the Foreign Intelligence Surveillance Act”. It has allowed the National Security Agency to order businesses to hand over all and any of their records. These businesses include AT&T, Microsoft, Apple, Facebook, Google and Yahoo!. In a single month in 2013 NSA’s “Global Access Operations” gathered 97 billion e-mails and 124 billion phone calls. Through the businesses they may order around and the huge amount of signals going through the United States, the reach of the NSA is global. Even now, society at large doesn’t really seem to appreciate the volume of information this entails.

Jim Sensenbrenner, former republican congressman, wrote the act with the intention of not allowing advanced surveillance of ordinary citizens. Today, NSA collect “all the signals, all of the time”. That includes all phone calls, all texts, all e-mails and all Internet searches. All metadata, the data covering information about who sends what to whom from where is also readily available. Two quotes by high-ranking officers makes its importance clearer. NSA General Counsel Stewart Baker said, “If you have enough metadata, you don’t really need content.” Upon hearing this, General Michael Hayden, former director of CIA as well as the NSA, agreed and added, “We kill people based on metadata.”

This level of surveillance makes practically anyone immoral, criminal and inhuman. None of us are saints. What we call private ought to be kept exactly that. The NSA prioritizes its own interests and neglects the privacy of individuals. The security apparatus of the United States acts in a way that was never accepted by the people nor the elected leaders of congress. This creates an imbalance in Montesquieu’s idea of separation of power (which is applied in the US and UK) between the legislature, executive and judiciary. NSA and the PRISM program is a power abuse by the executive power. Even more flagrant is the violation of constitutional rights done by the NSA. The first amendment ensures freedom of speech as well as the press while the fourth amendment prohibits unreasonable searches and requires warrants to have reasonable cause. The case against NSA can easily be made on either one.

The USA Freedom Act (Uniting and Strengthening America by Fulfilling Rights and Ending Eavesdropping, Dragnet-Collection and Online Monitoring Act) was signed in the House of Representatives on the May 22 this year. Jim Sensenbrenner introduced it, just like 13 years earlier. The intention of the act is to stop bulk collection of Americans’ metadata and allowing companies to disclose information about government requests. What power legislative power has over the rogue agent NSA has become is yet to be uncovered. Most if not all countries have since 9/11 taken part in creating the “more of a world that monitors” – a few laws won’t change that fact.