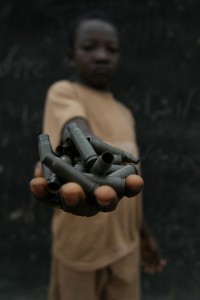 By the time this article is posted on the web issue of Utblick the paper copy will be available all over town, fresh off the printers. As you may or may not know, the theme for our last issue was Religion – a topic widely debated, especially when combined with conflict.
My original idea was to write an article about the religious tensions in CAR, Central African Republic, a country that has fluctuated some in mass media during the last couple of years but that has now, since a temporary peace treaty has been signed, been kicked off the front pages. My intention was to put the light on a somewhat forgotten state and at the same time dig a little deeper into the conflict claimed to be a battle between Muslim and Christian rebels. Whilst doing this (and also completely missing my deadline) I found out that this state is indeed not an example of yet another religious conflict. Instead I found that the conflict is more likely to be caused by the fact that the country is deeply stuck in a poverty trap, mainly caused by years of maladministration and corruption as well a lack of capital stock and technological development.

Prior to explaining my theories I will give those of you who know very little about the country a brief background. CAR is a small country landlocked north of DR of Congo and Congo. CAR borders South Sudan and Sudan to the west, Chad to the north and Cameroon to the west. The population is estimated to be around 4.7 million, around 40 % of the population is 14 years or younger. CAR is one of the world’s poorest countries and malnutrition as well as treatable diseases such as Malaria and TBC plague the country. The population is usually referred to as either Christian or Muslim but this is an extensive simplification. The reality is that traditional indigenous beliefs play a large role affecting every religious belief among the mainly rural population. CAR gained independence 1960 and has since then had its fair share of coups, corrupt leaders and brutal regimes. The country has suffered from several civil wars, the latter of these officially ending in July this year although there are reports of ongoing killings.

CAR is usually referred to as an unstable and underdeveloped country much affected by conflicts, ongoing as well as ended ones, in neighboring countries. The instability that the country is experiencing today is most definitely a result of armed conflict and poor leadership throughout decades and religious tensions although I find it necessary to also look at the economic background as a trigger for the many disputes. The way I see it, economic growth or rather the lack of it usually leading to deep poverty may just as well be a reason to why the country has experienced such long periods of political chaos.

In macroeconomics the concept of growth is central to understanding the developing world and especially why and how some states experience rapid growth while others seem to stagger behind.
One theory of growth, the Solow model, is derived from the neoclassical theory. This is a pretty basic and straight forward model, built on the theory that growth springs from a production function affected by what is referred to as capital stock. In this model growth is simply an increase in GDP (gross domestic product). Capital stock is produced durable goods such as machines, buildings etc. In the basic Solow model GDP (growth) will increase if the capital stock increases. Worth noting is that this growth is not indefinite and eventually will come to an end. This is pretty logical and easy to picture. Imagine having one worker at a factory. Since you only have one person working it will not matter how many machines you invest in, production (and growth) will eventually reach a maximum.
The Solow model, in its most basic form is of course a simplification of the truth but nevertheless interesting in regard to the Central African Republic. When immersing myself in the country it becomes clear that the lack of capital stock is one of the main reasons why the country has not managed to develop in accordance to its many natural resources. The country is rich in gold, diamonds and dense forest but the income from these assets is very low. The landlocked position and poor infrastructure is yet another factor that makes economic development difficult.

Before leaving the macroeconomics aspects of the conflict an addition has to be made to the basic Solow model. In the basic model capital stock is seen as the major input generating GDP. However, as mentioned before, GDP cannot grow forever in regards with this type of input. The more complex model includes depreciation of the capital stock, acknowledges growing population and most importantly shows a strong positive correlation between technological development and a growth in GDP. The correlation between growing population and growth is negatively correlated although it may be positive in the short run with an expansion in the work force.

Last but not least the term technological development is of interest in this context. Trying to define the term is complicated since it depends greatly on the context. In Sweden technological development may mean that Ericsson is developing a new smart phone but in the CAR the term is likely to be associated to something that is already in use in most first world countries. The thing we do know about technological development in regard to GDP is that it is the only factor that can shift the GDP curve upwards, hence create endless growth.
Now, let’s leave the world of models and return to the conflict. As mentioned earlier CAR has had a history of corrupt leaders affecting the development and the economy negatively. I won’t mention them all but I recommend you to google for information in regards to this (there is plenty). The many leaders and their pursuit of gaining power is nonetheless interesting. Facing serious problems achieving good governance throughout decades has taken its toll and it is quite clear that the majority of the population has no or very little trust for the government. In combination with widespread corruption this is to be viewed as one contributing factor to why there have been plenty of coups throughout the young nation’s history.
In addition to a lack of trust towards the government and the rulers the many widespread diseases such as malaria, TBC and HIV/AIDS is a major challenge for CAR. The lack of governance has resulted in a healthcare system that is close to non-existing. When it comes to HIV/AIDS CAR is the worst affected country in central Africa. Regarding Malaria, MSF (Doctor Without Borders) is reporting “every individual in the population infected at least once per year”.

The list of problems plaguing the country can be made endless. And it is this list of endlessness that poses the real problem for the nation. As the Solow model implies the easiest way receiving economic growth is through capital stock. CAR has very little capital stock. Natural resources do not count as capital stock and the nation is because of this basically without a foundation to build an economy and a country from. Another option (and a better one) is to achieve growth through technological development. The growth rates made possible from this output can be seen in for example South Korea. Worth noting here is that South Korea and many other fast growing economies have for example a well educated population or sufficient infrastructure or a more or less open economy. CAR has none of this. Instead CAR is deeply stuck in a poverty trap a term that can be defined as “Poverty trap is a self-perpetuating condition where an economy, caught in a vicious cycle, suffers from persistent underdevelopment”.
Having established that CAR is lacking pretty much every part composing a functioning state we are now able to view the ongoing violence in CAR with a fresh set of eyes. The main reason for the last coup (when Séléka rebels gained power) may not have sprung entirely from the fact that previous leaders has mainly been Christian. Neither is the conflict a result from widespread corruption or lacking infrastructure. Surely we are wrong to imply that religion or ethnicity or inadequate health care has nothing to do with the complexity of the situation. However widespread poverty, no real growth over the past decades and a stagnation of development are the real factors behind the complex situation. Reducing the conflict to primarily be about religion is as fruitful as trying to convince people that apples are oranges.

For those of you still reading I would like to finish off this short text recommending “Ending Africa’s Poverty Trap” by Jeffrey D. Sachs et. al., a paper discussing poverty traps in Sub-Sahara countries. The paper also mentions ways of tackling the economic problems and promoting massive economic interventions to sort of help some developing countries over the “threshold” and out of the poverty trap. Whether or not this is a relevant, a morally acceptable or even an actual possibility in CAR is left for you as a reader to decide on your own.