Skip to Content
Home Arts + Culture Culture This is not the Pope you’re looking for!

Anja Johansson Leave a Comment on This is not the Pope you’re looking for! 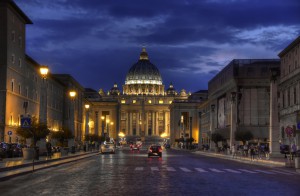 The media frenzy surrounding Pope Francis since his ascension in February 2013 is seemingly ever escalating. Notably, compared to his predecessor Benedict XVI, the intense media scrutiny of the present pope has been almost entirely positive in nature, whilst betraying some significant shortcomings in the knowledge of Catholic theology on the part of reporters.

The new Pope has been compared favourably to his predecessor on all points, ranging from apparel (Benedict wore red shoes, restoring the traditional footwear of popes past, whilst Frances prefers plain shoes) to theology. Francis’ decisions about personal appearance seem almost selected to contrast his unpopular predecessor’s taste for traditional papal style. He travels in a plain Ford Focus within the Vatican (of course, no prodigious distances are to be found within the Vatican), and he has chosen not to live in the traditional papal quarters, preferring a (quite plush) boarding house.

More than the Pope’s personal appearance, his theology and opinions have been discussed in a similar style. Francis’ every comment has been interpreted as revolutionary.
The Pope’s statement on evolution was reported by, among many others, the Independent, Telegraph and Huffington Post, as a controversial issue, where the Pope appeared like a benevolent, modernising revolutionary. However, as the official Church teaching on evolution has been on board with the general view since 1950, when Pope Pius XII authored the encyclical Humani Generis, this take on it is ludicrous.
Francis’ stand on homosexuality made another splash, with quotes like “who am I to judge them if they’re seeking the Lord in good faith?” causing headlines all summer. Yet again, a simple perusal of the Catholic Catechism, easily available online, would have shown reporters the following:

2358: The number of men and women who have deep-seated homosexual tendencies is not negligible. This inclination, which is objectively disordered, constitutes for most of them a trial. They must be accepted with respect, compassion, and sensitivity. Every sign of unjust discrimination in their regard should be avoided. These persons are called to fulfil God’s will in their lives and, if they are Christians, to unite to the sacrifice of the Lord’s Cross the difficulties they may encounter from their condition.

2359: Homosexual persons are called to chastity. By the virtues of self-mastery that teach them inner freedom, at times by the support of disinterested friendship, by prayer and sacramental grace, they can and should gradually and resolutely approach Christian perfection.

The Pope has not on any point deviated from the official stance.

Furthermore, like Popes before him, he is firmly against marriage equality, female priesthood, abortion and contraceptives. In fact, there is very little that separates him theologically from Benedict on issues that can be judged as progressive.
Despite interviews that may hint to the opposite, Francis has not, despite his absolute power over the Church as Pope, actually done much of anything. The one exception is his call for a synod on a reformulation of the tone of the approach to homosexuals and divorcees, which was voted down.
His predecessor, on the other hand, got the shorter straw.
Few knew the previous pope by his pontifical name. Instead of referring to him as Benedict XVI, his civilian name clung to him like burdock – Ratzinger. Pope Benedict seemed to lack in charisma and media savvy to a considerable degree. He was seen as old-fashioned, unpleasant and rigid, and jokes about his resemblance to the Emperor in the Star Wars movies and about his shiny red boots mingled with righteous fury at the handling of paedophilia and corruption scandals. Media seemed to revel in discoveries of the unpopular Pope’s past as a citizen in Nazi Germany, in his condemnations of abortion, contraception and female priesthood, and in his shortcomings as a leader.

A part of the clue lies in Benedict’s treatment. The public did not see Benedict as a satisfactory replacement the much-loved John Paul II. One sign of this might be the refusal of the public to recognise him by his Papal name, instead calling him Ratzinger, to show that he was not accepted as a judge of morals. Rule adhering and scholarly, without much in the way of charisma, he was soon made into a scape-goat for the many paedophilia and corruption scandals that shook the Church, which he handled with little delicacy and transparency. His unapologetic and stiff behaviour turned him effectively into an effigy of everything that was seen as wanting in the Catholic Church – its pomp, its relentlessness, its heavy handedness, its antiquated views – and as such, he burned. After his resignation, the new pope, with his radical differences in appearance and personal behaviour, and his status as the first non-European Pope, was naturally greeted as a fresh change. His every move is thus interpreted as heralding progressive change and a revolution in the Catholic Church, embodying everything Benedict was not seen to stand for: progressive social values, transparency, approachability, modesty.

Clearly, they got the wrong Pope.