Democracy out of Fashion? 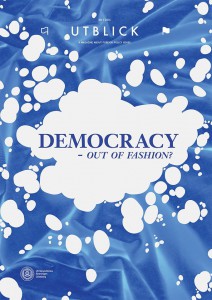 Democracy is often spoken of as the best form of governance that exists. While this may be true, democracy is by no means a flawless alternative. We’ve seen time and time again how democratic countries fall into ruin as a result of the people’s right to determine the form of state. The same people who are supposedly guided by egoistic incentives and discontent. It happened in Germany in the 1920s and 30s, then again in Serbia in the 1990s, and it’s happening again all across the democratic world. On the other hand, no constitution has ever proven as successful in so many instances as democracy has, begging the question ‘is there even a better alternative, or is democracy the best we’re ever going to have?
“Democracy – Out of Fashion?” offers a series of diverse analyses of countries where democracy is being challenged or is inefficient, as well as discussions regarding the very idea of what democracy is.