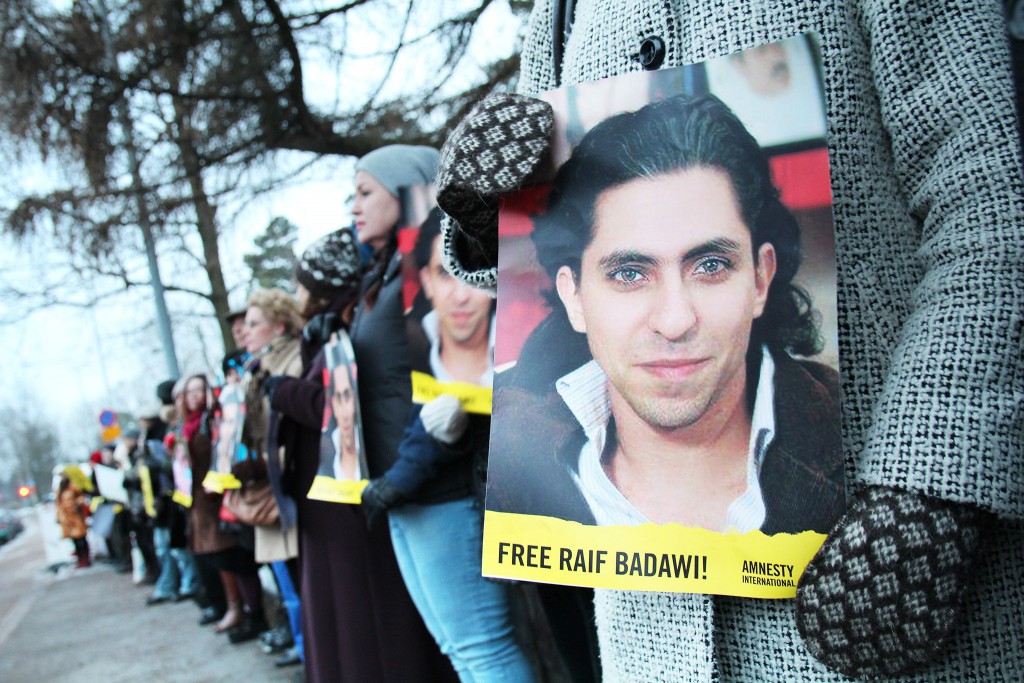 Paris, January 11, 2015. The streets fill with hundreds of thousands of protestors in a huge outpouring of support for Charlie Hebdo and the principle of free speech. It is a dreary, gray day and the crowd’s somber clothing reflect the general atmosphere in the capital mere days after the fatal shootings. Over 40 world leaders walk arm-in-arm in what appears to be a moving act of solidarity, among them Saudi-Arabian ambassador Dr. Mohammed Ismail Al-Sheikh. Nothing in his appearance betrays that just two days previously, 4500 kilometers away on a hot public square in Jeddah, a crowd was also forming, yet not with the purpose of protesting anything. They had come to witness the flogging of Raif Badawi, 31-year-old Saudi citizen who was sentenced to 10 years in jail and 1000 lashes simply for openly criticizing his country’s regime.

Badawi is, along with numerous other Saudi activists and writers, suffering the effects of a relentlessly strict application of Wahhabism, an ultraconservative form of Sunni Islam. One of few nations to have abstained from signing the Universal Declaration of Human Rights, Saudi-Arabia is a very precarious home for those with deviant political or religious ideas, something Raif Badawi knows only too well. As a young activist, he founded the website Free Saudi Liberals, a forum for public debate to which he also contributed articles. In 2012 Badawi was arrested for insulting Islam through electronic channels. Though he was initially charged with apostasy which carries the death sentence, his verdict was altered to 10 years in prison, 50 lashes every Friday for 20 weeks, as well as a fine of 1 million riyal (equal to about €234,000). His wife and three children have fled to Canada where they have gained political asylum. Looking back at the Paris rally, the fact that the Saudi ambassador was sent to march for freedom when his country cannot even grant its citizens basic rights makes the whole act ambiguous to say the least.

Let’s take a closer look at what it was about Badawi’s texts that was so offensive to the Saudi government.  The Guardian has made available translations of his main pieces, and it is striking how eloquent and wonderfully unequivocal they are. One of Badawi’s main concerns is the lack of freedom in a country where a narrow interpretation of Islam penetrates all spheres of life including politics, science, education, culture, and social relations. Here are some of Badawi’s thoughts on the need to separate state and religion:

No religion at all has any connection to mankind’s civic progress. This is not a failing on the part of religion but rather that all religions represent a particular, precise spiritual relationship between the individual and the Creator. …However, positive law is an unavoidable human and social need because traffic regulations, employment law and the codes governing the administration of State can hardly be derived from religion.

States based on religious ideology … have nothing except the fear of God and an inability to face up to life. Look at what had happened after the European peoples succeeded in removing the clergy from public life and restricting them to their churches. They built up human beings and (promoted) enlightenment, creativity and rebellion. States which are based on religion confine their people in the circle of faith and fear.

In another piece Badawi ridiculed the event where a TV preacher denounced astronomers, claiming their research undermined the beliefs of Sharia:

Actually, this venerable preacher has drawn my attention to a truth that had been hidden from me and my dear readers – namely, the existence of the so-called “Sharia astronomer”. What a wonderful appellation! In my humble experience and in the course of my not inconsiderable research into the universe, its origins and the stars, I have never once come across this term. I advise NASA to abandon its telescopes and, instead, turn to our Sharia astronomers, whose keen vision and insight surpass the agency’s obsolete telescopes.

The Free Saudi Liberals website was shut down permanently following Badawi’s arrest. He received his first set of 50 lashes on the 9th of January for his writings and has a further 950 to endure.

The coinciding of the Charlie Hebdo rally and Raif Badawi’s flogging has led activists to adopt the phrase “Je suis Raif”. Besides campaigning directly for Badawi’s release, it carries the message that we must not forget all the other Charlies whose voices are currently being silenced. Just another example close to Badawi is his lawyer, Waleed Abulkhair, who is currently serving 15 years in prison for his human rights work.

Recent developments in Badawi’s case do allow some space for optimism. Although he has received his first set of lashes, further flogging has been postponed several times, reportedly due to medical reasons. It is to be hoped that this is an underlying sign that international pressure is starting to affect the Saudi government. For example, on February 10, Prince Charles raised the plight of Raif Badawi with the Saudi king during a six-day tour of the Middle-East. King Salman, who acceded to the throne, as recently as January this year, has the power to free prisoners by granting a royal pardon. Meanwhile Nobel laureates, politicians from several countries and a long-standing campaign by Amnesty International have all called for Badawi’s immediate release.

For more information on what you can do to help, visit Amnesty International‘s website.