Mid-december and the sun stands high over Sheikh Zayed Road in Dubai. The Pakistani taxi driver shoots through the traffic, zig-zagging the six lane highway that cuts the city lengthwise. Driving by the districts Downtown Dubai, Internet City, Media City, Dubai Marina I lose count on the number of skyscrapers we pass.

“If you would have come fifteen years earlier this would only be a desert”, the taxi driver says while pointing towards the Gulf as we take off at the last exit at Dubai Marina. The road we just got off continues south-west to United Arab Emirates’ capital – Abu Dhabi.

Thirty degrees and humid air surrounds me when I get out of the taxi on the Jumeirah Beach Residence’s and I begin to understand that Dubai city is truly the city of development. The concrete has merely dried on one side of The Walk and another one, closer to the beach, is occupied by rebar structures and construction cranes. 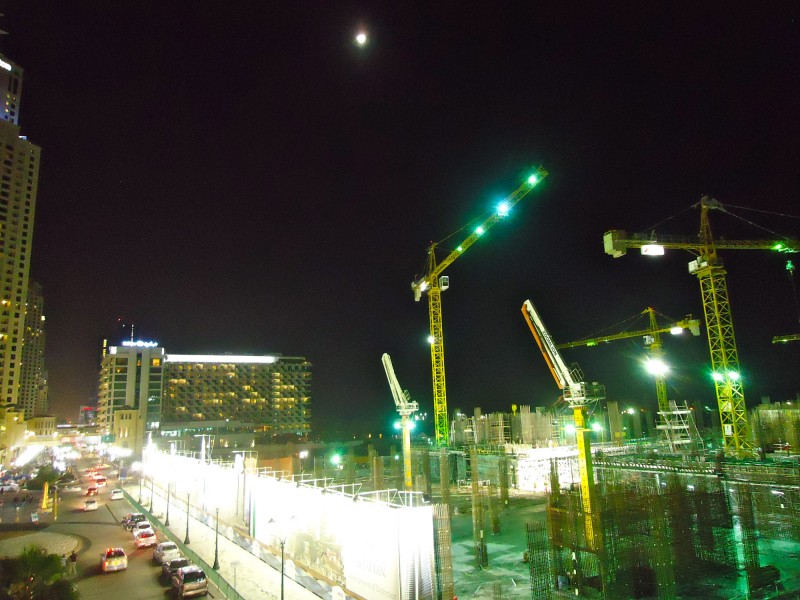 Construction work at The Walk in JBR

This record-breaking city holds so many world records that the achievement in itself is a world record. The easiest one to spot is the world’s tallest man-made structure: Burj Khalifa. With its 829.8 meters Burj Khalifa leaves the world’s second highest structure more than a hundred meters below. So how do you start to build such thing?

The answer is money. Rumours have it that the building was initially named Burj Dubai. However, after a shortage of capital during the building process a sponsor, president Sheikh Khalifa of Abu Dhabi contributed with a humble amount of money. In return he wanted the building to be named after him. (Read more)

Another way to express extreme wealth in this country is by holding a low number on your license plate. Businessman Saeed Al Khouri might have taken this too far when he bought the coveted plate with number one on it. The price? 14.1 million dollars. (Read more)In this steaming hot environment, both in terms of the desert wind’s temperature and the economic growth, the inequalities and everyday differences between rich and the poor are clearly exposed. The contact between two different worlds makes Dubai a unique place on earth. Or as the Moroccan-French expat Maryam explained it “Here the Filipino waiter earns almost nothing when he serves some of the world’s richest people.” The question is to be addressed, who pays the highest price?

Moreover, the United Arab Emirates is estimated to be the safest country in the Middle East when it comes to order and security, and was placed fifth in the world on the Rule of Law Index given by the World Justice Project. (Read more)

The Sharia law is effective. In shopping malls, in the street or lounges you must obey the law of not showing overt display of affection. Meaning no hands are held and no kissing is allowed. If you are lucky enough to have found a partner on the dance floor or in the relaxing lounge sofas – or if you are here on vacation with your partner – you can be sure guards will make sure you do not show affection. This might be the preferred alternative since, strictly juridically speaking, showing affection could lead to jail. Having guards present in public places does, however, entail benefits. While sitting in a restaurant you’ll never have to worry about your handbag, cellphone or wallet. If someone happens to see an old friend they just leave their valuables on the park bench or dinner table, without a single remnant of doubt.

The 2nd of December UAE celebrated its 42nd national day since having become independent from the former British rule in 1971. This year, a couple of days prior to the 2nd of december, it was announced that Dubai will hold the world exhibition EXPO 2020, which means Sheikh Mohammed bin Rashid Al Maktoum’s city will be the world’s centre of attention. This was a very symbolic and important step for Dubai. The whole city was in ecstasy and Burj Khalifa turned into a burning volcano as the show of fireworks continued during the celebrations.

One of many reasons why Dubai was selected to hold the EXPO in 2020 is its geographical position. A circle with Dubai as its centre point and with a radius of an eight hour flight time covers almost two thirds of the world’s population: From Japan and Indonesia in the east, stretching over the Sahara desert down to South Africa in the southwest, over to the United Kingdom and Ireland and including both Scandinavia and a most parts of Russia in the north.

A well-suited man gives me a couple of minutes of his time. His name is Yossuf “I came here in 2006 and it felt like paradise, but after a while I realized something was missing.” He wanted to live in a “normal” city with parks and green areas. “So after a couple of years I went to South America. It was such a difference!”. But as time passed he wanted to go back to Dubai “I’m back now and I work at an insurance company. It’s good, but there are still no parks here. And no old people or teenagers”, he laughs while saying this, but inside I see he’s a bit sad about it. The lack of an old and a young population is just as noticeable, as it is strange – everyone you see are in their thirties, in the middle of their careers.

Maryam, the Moroccan-French woman again “I hold a masters degree in Public Relations. But in France I couldn’t find a job”. On the question why Maryam moved to Dubai, she answers “In France we have something called racism. French is my mother tounge but I have wrong name in the passport. So Dubai was a good option, I thought. Here racism is not a problem and I can hopefully find a job”.