Skip to Content
Home Culture Women of Afghanistan – An Excerpt

Turkan Omari, a young graduate who is currently writing her book Women of Afghanistan, has written an exclusive article in Utblick about her project. Here she tells us about what inspired her to write the stories in the first place.

– “Nothing is as hopeless as it seems.” This is what Tuba Hashemi, a former human rights lawyer who fled Afghanistan to Sweden told me, during our interview 2 years ago. Tuba is not only my first interviewee for Women of Afghanistan, but she is part of the inspiration for why I am writing this book in the first place.

I only knew Tuba as my mother’s friend and had very limited knowledge about her background – I suppose she was very modest about it. One day she mentioned to us how she wanted to continue to work as a lawyer in Sweden, and that took me by surprise. I thought she was a housewife like other afghan women I had met. I never imagined her as a human rights lawyer. My own prejudices became visible to me. After hearing her story I realised the idea for my book. I decided to conduct the first interview with her for my project.

Tuba told me about how she was appointed by the Afghan government to work on a project on educating women in rural areas, with the aim of empowering them to become economically independent. Her first visit was in a village in northern Afghanistan. She had prepared the seminar thoroughly for months expecting to meet young women eager to learn and contribute to their households. But reality was something far from her expectations. Instead she was met with a room full of conservative, long bearded older men. She realised that the issue here was not only villagers being suspicious of the government, but also, prejudice. The people she met held the belief that women in public spaces could be risky and cause dishonour to the family name. Despite this, she started her seminar. Her initiative was met with criticism from the men, who did not expect their lecturer to be a highly educated and outspoken young woman.

– At first I felt sad because of the lack of women in the room, and disappointed over the backlashes from the men. But then I realized: I am making history, I am falsifying the assumptions of educated women, and I felt proud to finally be in a position where a woman is in charge.

Unfortunately, Tubas project was cancelled because of the difficulties of enrolling women in the program. Also, as soon as the word got out about her initiative – where a young female lawyer was leading a women’s empowerment project – she began to receive death threats, forcing her to flee the country for the sake of her and her children’s lives.

Tuba’s story is unique. Yet, also very common. Women who live in countries with strong patriarchal structures struggle to have a career. However, this does not mean that they are not trying to work and engage. But, stories like these are rarely heard. It is not helped by the media’s misrepresentation of women from countries like Afghanistan. Often it is a one-sided story that rather than tackle prejudices, fosters the stereotypes about what women in Afghanistan are like. Despite being an Afghan woman myself I fell for this black and white portrayal of my country’s women. For years I believed that afghan women in Afghanistan had no hope. Gladly I realized this was nothing but the media’s misrepresentation of Afghan women, as I became more aware of the importance of sources and really exploring other sides of a story.

I realized that each individual is more than their appearance and more than how they are portrayed in the media.

In the case of Tuba, she is and should not be identified only as a refugee Afghan woman, but also as an independent, educated and intelligent woman, who defied discriminatory gender roles. An important lesson that I learned from my project is the importance of tackling generalization and misrepresentation of women. By sharing individual stories of women, we help each other to become more open minded. We need to stop judging each other based on assumptions. My aim is to share a thousand stories of afghan women from all around the world, to change conservative mindsets, tackle prejudice and stereotypes and bring diversity and representation to the spotlight for the new generation of Afghan women. 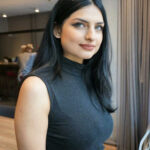 Writer for Utblick Magazine since 2020