To counter anti-gay forces the website “Gay Homophobe” takes advantage of one simple fact: every now and then a known anti-gay advocator are caught in a “scandal” which reveals their homosexuality (hence, a gay homophobe). The website has a counter that keeps track of how many days that have passed since the last time such an event took place. Of course, one could question the ethical aspects of hanging out people on a website like that. The owner of the website explains that the criteria for posting about it are when it concerns (a) people in power that (b) uses that power to advance anti-gay agenda. The purpose of the website is described as a combination of having fun and, on a more serious note, to make it easier for gay conservatives to come out and harder for anti-gay advocators to be taken seriously. (¹)

In other words, even in the midst of strongly homophobic contexts it’s just a matter of time before the next outspokenly anti-homosexual advocator comes out/are revealed to be gay. As I write this, the website says “days since the last prominent homophobe was caught in a gay sex scandal: 98”.

One could hope that such “scandals” makes it more difficult for anti-gay ideologies to thrive. However, for a lot of anti-gay groups homosexuality is something that you can “treat” with therapy. The idea of using therapy to “cure” or “convert” homosexuals into heterosexuality is called conversion therapy (or reparative therapy by some of its proponents), a practice that goes way back and have, at least historically, by no means been an exclusively religious practice. Sigmund Freud indicated that homosexuality could be changed through hypnotisms, and the endocrinologist that influenced Freud, Eugen Steinach, transplanted testicles from straight men into gay men in attempts to change their sexual orientation. Somewhat later Anna Freud claimed to be “successful” in treating homosexuals as a neurotics. Conversation therapy has been more or less well established within psychology and behavioural sciences for a long time. There is of course an obvious parallel here between the overall historical stigmatization of regarding homosexuality as an illness and the scientific interest of “curing” homosexuality into heterosexuality by therapy (just to give an example, when Sweden “removed” homosexuality from being regarded an illness in 1979 it was the first country in the world to do so).

Today conversion therapy is not supported by The American Psychoanalytic Association and many other professional organization while it is not uncommon among some Evangelical or Conservative Christian groups. The question is: should the practice of conversion therapy be forbidden by law? This brings us directly to the heart of liberal paradoxes of freedom vs. state control. In September 2012, as a result of the active work of the largest LGBT-organization in the U.S., California was the first state to sign a bill to ban the practice of conversion therapy or “gay converting” altogether. Governor Jerry Brown who signed the bill explained:

“This bill bans non-scientific ‘therapies’ that have driven young people to depression and suicide. These practices have no basis in science or medicine and they will now be relegated to the dustbin of quackery” (²)

This first-of-its-kind law to forbid conversion therapy, set to apply from January 1th (2013), was later blocked by a federal court that issued an “emergency order”, putting the law on hold. This federal court that blocked the bill consisted of a three-judge panel that was backed up by licensed counselors who practices reparative therapy and two families claiming their teenage sons had benefited from it. This conflict of interests will surely continue and if this law will ever see the light of day remains to be seen. (³) 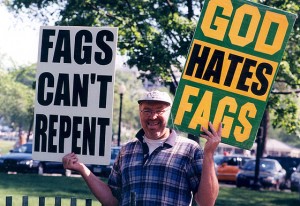 To what extent the state should impose restriction applies not only to the practice of pseudo-scientific and mentally damaging therapies, it is in fact a question that extends to homophobia and anti-gay propaganda in general. Such restrictions could become reality for one of the most infamous fundamentalist churches: the Westboro Baptist Church. This group has probably not gone unnoticed by many, it’s the group that are holding those big signs with the slogan “God Hates Fags”. The church is in fact a very small group of people consisting of only 40 members. Despite their size they are constantly put in the spotlight and given attention, on the internet and in media, something that could de-emphasize the wider problem of homophobia as a broader structure and institutionalized ideology. That being said, the Westboro Baptist Church is of course a relentless attention-craving homophobic group. They actually travel around from state to state, ruining funerals and picketing (protesting) whatever they think is “sinful” (which is of course just about anything). So to return to the question of freedom vs. state control, how should one deal with groups such as Westboro Baptist Church? What would Jesus do? Would he turn the other cheek (Matthew 5:39) or would he go berserk and ruff up their place (Matthew 21:12)? The Westboro Baptist Church are actually facing serious opposition. A petition on the White House’s digital platform that calls the U.S. government to officially designate the Westboro Baptist Church a “hate group” has been the most popular petition so far, with more than 265 000 signatures. Other petitions calling the government to revoke Westboro Baptist Church’s tax-exempt status have also been immensely popular. (4)

If this becomes a reality (fingers crossed) it will surely be followed by interesting debates as well as people defending their “fundamental” liberalist right to exercise and spread homophobia. All while the counter on Gayhomophobe.com keeps being reset.