The past week has been insane. Or perhaps I should say the past 10 days to be more precise. Part of the insanity has been the destination of my last conference – Krakow. As a European city, Krakow has been underrated and definitely under-marketed as a tourist destination. Krakow is evidence that good things hardly make it to the news – it is one of the few cities that survived the looting and destruction of WWII no damage, while majority other cities were bombed to the ground.

Having visited the city in the winter I had the opportunity to appreciate the -12 degrees C that loom over the populace. However, all is not to a loss. Constant snowfall coupled with the cold degrees, turned the central city park into a mini Narnia, where the trees complemented the white snow with dark silhouettes. The park in itself spans most of the inner city, so one is able to avoid walking next to traffic when making their way from one end to the other.

Unlike the grid designs of Manhattan, Krakow is planned in pear drop shapes. In the middle is the historic Rynek Glowny (Old Town), housed within the walls of the fort that surround the inner city. It reminded me of the old Town of Tallin. Not far from Glowny (perhaps a 10 minute walk) up on Wawel hill, looming above the city, is the old castle – Wawel along with a beautiful cathedral. Around this, flows the main river – Visla. 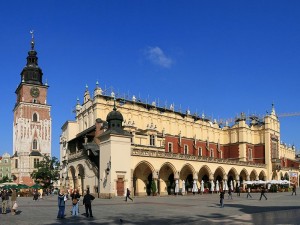 Fact 1: The Wawel housed the royal families of Poland but also one of the last Catholic Swedish monarchs – Sigismund. In fact, he is buried in Krakow.

The city’s former diverse mix of ethnicities is evidenced by the numerous synagogues found within the old Jewish quarters of Kazimierz. This was most probably my favourite part of the city, with little bustling shops and restaurants sprawled out. As a Swede reading most of the signboards became one of my main forms of entertainment, as more than one, would read as crude or embarrassing words.

Fact 2: Roughly 90% of the Polish population is Roman Catholic.

Being a foodie, I’m always curious as to what the local foods are and can’t wait to try them. I had recently seen a documentary about pirogues and their commonplace in Poland. However, I remained unprepared for the fact that I would NOT be able to try most foods, you see, Polish are big on pork. . As a non-pork eater, I had a difficult time getting pork-free food. So for majority of my stay, I was vegetarian – except of course in the Jewish quarters where there was plenty of kosher food available. By the end of the trip my summary of Polish cuisine, in one sentence; “Would you like some pork with your pork?” This is not an exaggeration. Having ordered a chicken schnitzel (as replacement of pork) I was caught off guard when there were tiny pieces of bacon chopped into my sour croute. The appetiser had been pirogues with a dip sauce – the dip sauce contained tiny pieces of bacon. And the soups were mostly based on meat bouillon, wouldn’t be surprised if it was pork. Even more, they are big on breading and frying their food.

The lack of non-pork options did not bog me down, because the restaurants offered great salads at great prices. The fact that one can still eat a whole lunch under 50KR, this too including your drink, was a pleasant surprise indeed. The silverlining however lay with the numerous bakeries to be found at every little street, offering delicious treats – ranging from cheesecake to simple pastries stuffed with some form of cheese.

Fact 3: Krakow is one of the oldest cities in Europe, dating back to the Stone Ages.

The city is rumoured to have more bars per square meter than any other in Europe! And true to its reputation, we ended up being out at bar until 3 am, sitting next to a live fireplace (which are very common in bars there) warming us, while listening to music watching the flow of people that kept streaming in. Even as we exited the bar, people kept coming, reminding me that the night was still young. All this helped negate my earlier prejudice that had led me to believe such partying only to possible in London.

The point I’m trying to get across: catch a flight to Krakow, because Poland is about to surprise you.